– Just as the fight was about to commence on Monday Dr. Bruner (who was to act as surgeon) was called to Powell Park on a professional visit. Mr. and Mrs. Grant Purcell furnished the subject in the shape of a daughter.

– An incipient sheep war broke out on Limekiln hill last Saturday morning, but later on a mutual understanding was reached between the contending interests, whereby their respective spheres of territory was more clearly defined, and the sheep men agreed to move up on the divide and leave the hill to the cattle. This grim-visaged war was compelled to hide his hideous head for the time being, and Old-Blood-to-the-Bridles Waite will not be permitted to invade our peaceful pastoral precincts on the present occasion.

– Popular Marvine Lodge is full to overflowing these days.

– This town should provide better camping grounds for autoists.

– Haying is now only interrupted by the rains we should have had last month.

– It is said that lots of dead fish have been seen in the river of late. Fishologists ought to investigate.

– A preliminary drawing of the proposed courthouse can be seen at County Clerk Wilson’s office. The drawing is by Architect Bowman and presents a structure which would be a credit to Rio Blanco County.

– James A. Keller, son of Charles M. Keller of Meeker, has an important role in the Apollo 11 lunar landing missions, which lifted off from Cape Kennedy, Florida, yesterday. He is a project engineer in the Launch Operations Directorate of the National Aeronautics and Space Administrations Kennedy Space Center in Florida.

– Moving to Meeker two weeks ago to assume his duties as manager of Our Co-Op, Meeker, was Vernon Bowman and family of Brush. Mrs. Bowman (LaVina), is a native of Woodrow, while Vernon claims Brush as his hometown. They have two children, Scotty 3-1/2 years old and Becky, 2.

– The aerial reconnaissance flight Tuesday afternoon over the Ute Creek fire near the Flat Tops Wilderness area revealed only the smoldering remains of the 2,800-acre blaze, which has been controlled on the north, west and east flanks as of Wednesday morning.

– Arriving in early July to assume the pastorate of the Meeker United Methodist Church was the Rev. Grace Hauman, who comes to the area from Lusk, Wyoming. Grace has been in the ministry for 12 years and is joined by her husband, Fred, who is now retired but has been a Presbyterian minister since 1960.

– Rangely’s city council Monday night agreed to offer a $500 reward for information leading to arrest and conviction of those involved in vandalism to street lights on Kennedy Drive.

– Stanley and Terri Rasmussen are long-time residents of Rangely. About 10 years ago they started raising birds as a hobby and the result is Rocky Mountain Aviary at 118 Weber. 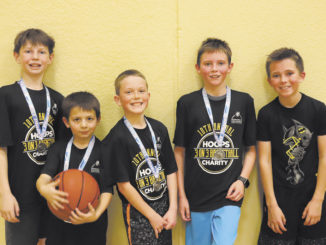