RANGELY | This past Saturday was an early start to the morning before the sun came up for the Rangely Junior High volleyball teams as they traveled to Hayden to play in their first match of the season. The Rangely Junior High volleyball team have forty one girls out this season. This is the largest group of girls to come out to play volleyball. Coaches have been working hard with all of the girls.
Rangely took three teams to play the Hayden Tigers. Arriving in Hayden the girls were anxious to start playing. The first match against the Hayden Tigers was 8B, consisting of eighth graders Rylee Wagner and Laurie Ward, along with seventh graders Jasmine Brannan, Allie Coker, Karlee Halcomb, Paola Munoz, Lilly Noel, Audy Ryder and Emmeree Wagner. As the first match started the girls were nervous but settled down to come up with the win. Top server was Ryle Wagner with five points for the match but defense stayed strong to win with the score of 25-22. For the second match the Rangely Panthers started very strong with the first five points coming from our top server for this match being Karlee Halcomb with eight points giving them the win with a score of 25-13.
The 7A team consists of seventh graders Miah Wren, Aslynn Ducey, Emma Winder, Allie Coker, Miley Chism, Lexi LeBleu, Angelina Fortunato, Jade Miller and Karlee Halcomb. During the first match our top server was Lexi LeBleu with six points as our defense tried to keep us in the match. In the second match the top server was Miah Wren with seven points. In both games Lexi Lebleu had great defense as the Libero. The team played hard against the Hayden Tigers but came up short with the scores of 17-25,19-25.
The third and final match for the day was the 8A team which consist of eighth graders Annika Cantrell, Kastyn Dembowski, Morgan Ellis, Ryann Mergelman, Alyson Polley, Emma Smith, Laurie Ward along with seventh graders Allie Coker and Karlee Halcomb. The team’s top server in the first match was Karlee Halcomb with five points to help the team get the win, with a score of 28-26. In the second match the Rangely Panthers top server was Emma Smith with six points with a score of 25-13. Great net play by Kastyn Dembowski really helped set the tone early. Morgan Ellis did a great job of setting the ball up with Ryann Mergelman being able to finish a lot of plays with kills. Halcomb did a great job defensively playing DS in the middle. We are looking forward to our game on Tuesday against Vernal, and then home on Saturday for a triangular with Meeker and Craig.

As the finishing touches are being put on the new United Methodist Church in Meeker, the church’s 100-plus-year-old sanctuary will soon be torn down. Despite efforts to find a new home for the old church, […]

RANGELY I Nothing like getting tested early. Rangely Senior High’s volleyball team won three out of its four matches last weekend in a tournament at Glenwood Springs, including one against county rival Meeker. 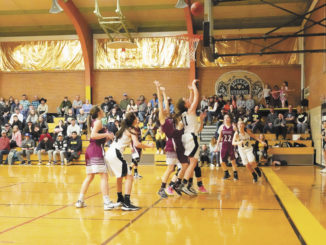