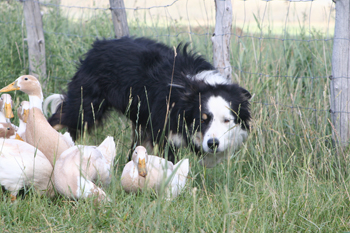 Ellen Nieslanik’s dog, Pete, kept a close eye on a “herd” of ducks Aug. 12. The ducks arrived in the mail around the Fourth of July and will be used in a dog handling demonstration by Chris Jobe during the Meeker Classic Sheepdog Championship Trials. The event is Sept. 8-12. The Nieslaniks have kept the ducks at their rural Meeker home. They started out with 14 ducks, but lost two to raccoons. “It’s been fun,” Ellen said of raising the ducks. “They adapt really well.” Ellen said using ducks to train handling dogs “is really good for people who want to get into it and don’t have sheep.” Middle right: Ellen’s dog, Nell, worked with the real thing — sheep. Below: Ellen’s son Sam has named some of the ducks, including Ping, Rocky and Chief Sitting Duck.
JEFF BURKHEAD

MEEKER | Oran and Amy Rundberg would like to announce the birth of their son Elijah Charles Rundberg, born Sept. 14 at Memorial Hospital in Craig. Elijah weighed 7 pounds and was 20 inches.

Letter: Respect the office of president

In the events of the past week over the hub-(bubba) of our president speaking in schools, I didn’t know if I should laugh or cry. Let’s cut to what I see is the real reason […]

MEEKER I When their country needed them, they answered the call. And they changed the world. But it took nearly 60 years for a national memorial to be built in their honor. “It made me […]