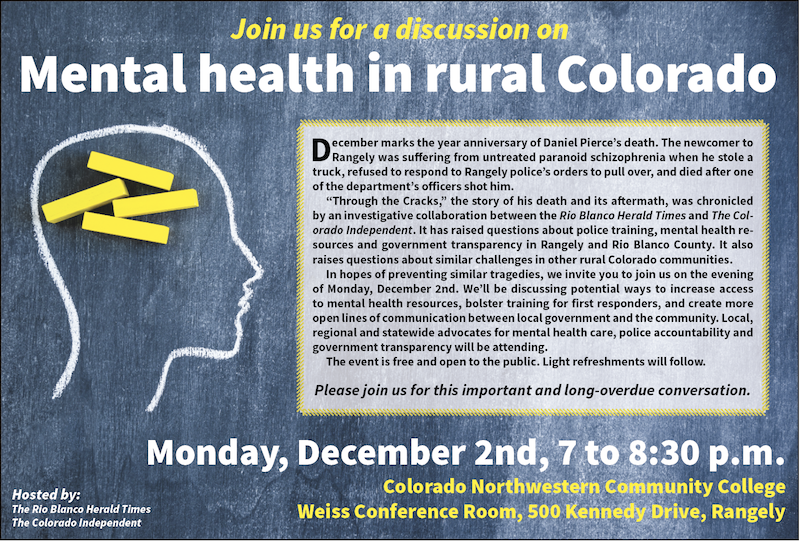 RBC | Join us for a discussion on mental health in rural Colorado this Monday, Dec. 2 from 7 to 8:30 p.m. at CNCC’s Weiss Conference Room, 500 Kennedy Drive, Rangely.

December marks the year anniversary of Daniel Pierce’s death. The newcomer to Rangely was suffering from untreated paranoid schizophrenia when he stole a truck, refused to respond to Rangely police’s orders to pull over, and died after one of the department’s officers shot him.

“Through the Cracks,” the story of his death and its aftermath, was chronicled by an investigative collaboration between the Rio Blanco Herald Times and The Colorado Independent. It has raised questions about police training, mental health resources and government transparency in Rangely and Rio Blanco County. It also raises questions about similar challenges in other rural Colorado communities.

In hopes of preventing similar tragedies, we invite you to join us on the evening of Monday, December 2nd. We’ll be discussing potential ways to increase access to mental health resources, bolster training for first responders, and create more open lines of communication between local government and the community. Local, regional and statewide advocates for mental health care, police accountability and government transparency will be attending.

The event is free and open to the public. Light refreshments will follow.

Hosted by the Rio Blanco Herald Times and The Colorado Independent

Zinnias are in full bloom in Rio Blanco County right now, along with other cultivated flowers like blanket flowers, daisies and coneflowers.

Low-lying clouds cast a shadow across the higher clouds at sunset in Rangely on Friday night. The phenomenon is particularly striking when tall land masses, like Wyoming’s Pilot Butte and Washington’s Mount Rainier cast “sky […]

RANGELY | The following exciting classes are still available for registration: