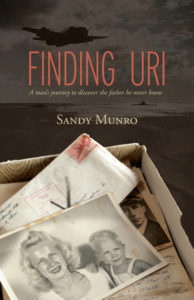 MEEKER I The box that came to Sandy Munro a few months after his mother passed away in 2007, was a virtual time machine into the past. The love story that emerged from the correspondence between Munro’s father and mother is now available as a book titled, “Finding Uri,” published by People’s Press.
Munro’s father, Uri Munro, was a naval aviator during World War II flying from the U.S.S. Enterprise. Uri Munro’s plane was shot down over the Pacific in 1945 when Munro was 4 years old.
Munro, from Maryland, followed in his father’s footsteps, graduating from the U.S. Naval Academy in 1964 and serving as a Navy pilot and instructor for five years.
In 1969, after he was released from active duty, Munro moved with his wife and son to Aspen, Colo. His daughter, Tasha, was born the following year. Munro was a teacher at Aspen High School for six years, and then bought Aspen’s only music store, The Great Divide. He owned and operated the music store and teaching center until 2007.
Munro’s mother passed away in 2007. A few months after her death, Munro unexpectedly received a box of letters from her husband. At the age of 65, Munro was confronted with a sudden revelation of the father he barely knew, courtesy of 190 letters of correspondence between his parents prior to his father’s death.
Munro said he was able to gain a greater knowledge and understanding of his father through the letters.
“I just got a feeling for his personality and the way he expressed himself. His loyalty to my mother, and the country was evident throughout. It was hard for my mother to talk in depth about him because it was still painful, even 50 years later.”
“It was very emotional, and I learned a lot about the importance of family stories,” Munro said. “I would have liked more, but 190 long letters were very satisfying.”
He decided to transform the letters into a book because “I felt that the story presented itself to me, and because of the way it happened, I had to pass it along.”
Organizing and editing, “melding the letters and the narrative with the history,” was harder than he expected. He thought at first the story would just be for his own family, but to his surprise, a local small press publishing house, the People’s Press, took an interest in the story. “That made me take it more seriously,” he said.
Now that the book is in print, Munro said he believes his father would be proud of it. His mother “would bawl her eyes out, but she’d love it.” He hopes readers will come away from the story with a greater understanding of how a family’s loss never goes away, and “the importance of passing along our family stories to future generations.”
Meeker residents might recognize Munro as a member of The Flying Dogs, his bluegrass band, which has played in Meeker during the sheepdog trials. His daughter, Tasha Goedert, is a Meeker resident.
Munro is at work on a new project about about inspirational people and music tentatively titled “40 Years on the Divide.”
“It includes a lot of people stories from having owned a guitar shop in Aspen for 30 years,  another view of Aspen and the kind of people who live in the Roaring Fork Valley. Definitely not the glam stuff, but a few funny celebrity stories.”
Munro will be in Meeker Friday, Dec. 23 for a book signing at Wendll’s Wondrous Things from 3:30-7 p.m. at 594 Main St.
“I’m looking forward to seeing many of our Meeker friends. We’ve met many Meeker residents down through the years playing music in town for the sheepdog trials and visiting the kids and grandkids,” Munro said.
Avis’ Village Floral in Meeker, located at 325 6th St., will also carry copies of “Finding Uri.”

Wrestler, author in Meeker on Friday

MEEKER I Author Ray Coca will be in Meeker on Friday for a signing of his published book “Elite U.S. Dream … A Wrestling Story.”

RIFLE I Rifle Creek Museum is hosting another “Remembering Rifle” day with Gracie Petrakian as special guest on July 6 between 11 a.m. and 1 p.m.