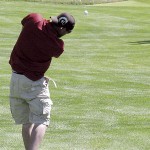 Travis Halcomb chips towards the green on Cedar Ridges’ No. 1 during the 27-hole, four-person scramble. Halcomb and his teammates Trey Robie, Josh Mousley and Jason Kurrasch finished with the highest gross score, 111.

RANGELY I “We had great weather and it was very competitive,” Cedar Ridges Golf Course manager Chris Hejl said of the field of 11, four-person teams. Hejl, Terrell Lowry, Robby and Ryan Elam were the best team on the course, which featured almost half the teams from out of town.
“We had two teams from Meeker, one from Rifle, Vernal (Utah) and Grand Junction,” Hejl said.
Hejl’s team won the 27-hole scramble with a gross score of 86, one shot ahead of Rifle’s Doug Choate, Joe Elliot, Rick Patterson and Mark Sours. Rangely’s Dennis Rohn, Terry Richadson, Marc Blake and James Maybury finished third, with a gross score of 93.
Meeker’s Irven Griffin, Donald Blazon, Rod and Ron Kelly Crawford recored the best net score (71) to win. Bryan Mackay, Ty Neiberger, Frank Huitt and Bernie Shafer of Rangely, tied with locals Jason Cox, Andy Safer, Manuel Gonzalez and Laura Gonzalez, two strokes behind the Meeker team.
Hejl said there was a spot for one more team for a night golf tournament, scheduled to be held Friday, July 8, starting at 9:30 p.m.
“They did it last year and everybody had a great time,” Hejl said of the tournament. Hejl said the club has a kit, which includes glow sticks for the flags, marking of the fairways and players use glow in the dark balls.
“The darker, the better,” Hejl said.
The nine-hole, night golf tournament will be played as a four-person scramble.

Jason Cox got his first hole-in-one this past weekend

RBC I Cedar Ridges Golf Course has been a busy place and will continue to be for the next two weeks as the 27-hole, two-man tournament will be played this weekend, followed by the Couples […]