The 18-members-strong Meeker Elementary School Marimba Band entertained the 200 persons at the second annual Meeker Education Foundation fundraiser dinner on Sunday evening at the Fairfield Center. “It was great to have so many of the kids involved and I think the faculty is buying into the fact that the foundation can and is helping them with expenses that are budgeted,” said MEF President Mary Strang. She said this year’s dinner drew twice as many people as last year and that within a few years, more space may be needed.

The Meeker High School Choir entertained the 200 persons present at the second annual Meeker Education Foundation fundraiser event Sunday at the Fairfield Center. MEF President Mary Strang said that roughly $8,000 was raised at the dinner and that the foundation is “highly thankful to the parents, the students and the school staff folks who helped make this such a big success.” The event included hors’ d’oeuvres, dinner and auction and entertainment by the Meeker High School Choir and the Meeker Elementary School Marimba Band. 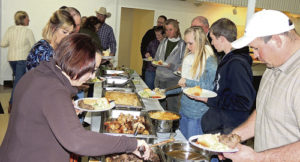 Pot roast, chicken and lobster macaroni and cheese were the main components of the dinner served Sunday night at the Meeker Education Foundation’s second annual fundraiser at the Fairfield Center. Roughly 200 supporters and students took part in the event, which, according to Meeker Education Foundation President Mary Strang said raised roughly $8,000 with the dinner, auction and donations.

Roughly 200 school supporters, students and parents took part in the Meeker Education Foundation’s second annual fundraiser event Sunday to raise funds to provide school supplies to all three Meeker schools for items that are not included in the budget. Those who attended enjoyed dinner prepared by chef and Meeker Town Trustee Scott Creecy, an auction, the Meeker Elementary School Marimba Band, directed by Shana Holliday and the Meeker High School Choir, directed by Jeff Hemingson.

Listen to this post MEEKER I The public is invited as the Meeker Education Foundation hosts its inaugural Snowfest and Dinner, full of outdoor fun and food on March 1.

Listen to this post MEEKER | The Meeker Education Foundation will hold a public forum on school finance the second week of July. The forum will be held July 9 at 7 p.m. at Meeker […]