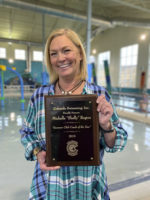 MEEKER | Shelly Rogers, ERBM Recreation and Park District Recreation Manager and Meeker Marlins USA Swimming head coach, was awarded the Colorado Swimming, Inc. Summer Club Coach of the Year for the 2019 season.  Rogers was nominated and voted as coach of the year by fellow swim coaches from across the state.

Twenty-two summer club teams participated in the 2019 season, with the Meeker Marlins placing second in the small team category at the championship swim meet. Rogers has been coaching the ERBM Meeker Marlins since 2012. She also coached the Meeker Makos for four summers at the old Meeker pool before it closed. Rogers has an extensive swimming background herself, competing at both the high school and collegiate level.