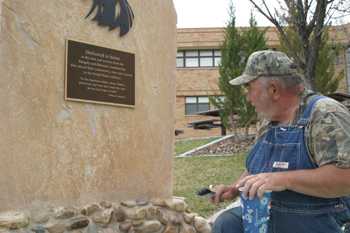 “It’s a six- or seven-foot tall rock, with a bronze plate on it and a panther (the RHS mascot), on a base of river rock,” said Beckey Hume, who works in the RHS office and was involved in the project by helping to draw up the original plans. “It’s a memorial to those who have served in the military, or who are serving. We finally got the rock erected. This has been an ongoing project for two years.”
Mark Jansen, RHS teacher and athletic director, was one of the project’s organizers, along with Pat Moore, who was RHS principal at the time.
“He came up with the idea,” Hume said of Jansen. “It started out, he wanted to have a flagpole out on the football field and track, but he didn’t know how to fund it. I told him there were people in the community who would donate to the cause. Within a week, we had the money.”
Chevron donated money for the flagpole.
Then, Jansen thought it would be a good idea to have a memorial. Although he isn’t a veteran, he thought a memorial was a way to recognize those who served in the military.
“That’s one of the reasons I wanted to honor them, they (veterans) protected me,” Jansen said. “I’ve had veterans come and speak to my classes, and I’ve had former students fight in Afghanistan and Iraq.”
Former principal Moore came up with the idea for the rock memorial, Hume said. 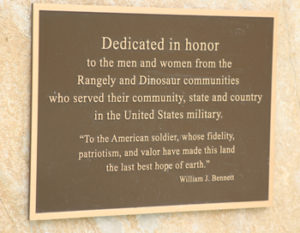 “Pat came up with the idea of the rock and the panther head, that it would be a real nice look,” Hume said.
The 2009 senior class donated $1,173 for the rock, which came from a quarry near Vernal, Utah.
Jansen was pleased this year’s graduating class wanted to be involved in the project.
“The rock was donated by the class of 2009,” Jansen said. “And they put up the money to have that panther inscribed on it. Last fall, we asked the senior class if they would be willing to pay for that, and they were more than willing.”
Gary Bartling of Rangely did the installation for the memorial.
“It’s a nice recognition of the people who’ve been in the services,” Bartling said. “I guess that’s the least we can do, huh?”
The bronze plaque on the memorial rock reads: “Dedicated in honor to the men and women from the Rangely and Dinosaur communities who served their community, state and country in the United States military.”
As a fundraiser for the RHS athletic department, nameplates in recognition of individual veterans are available for purchase for $20 and will be displayed on marble kiosks next to the rock memorial. Stewart Welding of Rangely donated the frames for the kiosks, which were powder coated and had granite slabs added to the tops.
“It turned out really nice,” Hume said.
And just in time for Memorial Day.

Listen to this post Meeker VFW Post 5843 conducted the service Monday at the veterans memorial at Highland Cemetery.

Listen to this post Local veterans service organizations will present a Memorial Day ceremony at 10 a.m. Monday, May 25 at the City Park bridge, followed by an additional ceremony at Highland Cemetery.

Letter to the Editor: Open letter to all RBC veterans

Listen to this post Dear Editor: This is an open letter to all Rio Blanco County veterans.