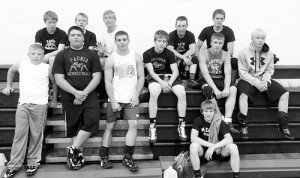 Eleven Meeker wrestlers competed in the Paonia Summer Duals, and many wrestled more than 12 matches during the two-day event, which featured 4A and 5A teams from Colorado along with teams from Nebraska, Arizona and New Mexico.

“It was a good experience,” Meeker head wrestling coach J.C. Watt said. “We took some younger guys who got a feel for what high school wrestling is like and our older kids had better competition against 4A and 5A teams.” The Cowboys will wrestle in the Colorado Mesa University Duals this weekend, starting Friday.
Wrestling in Paonia were: Jake Shelton, Josh Cochran, Tyler Ilgen, Christopher Strate, Anthony Watt, T.J. Shelton, (Griffin from Paonia), Kylloe Goedert, Robby Jensen, Chase Rule, Casey Turner and Sheridan Harvey in front.

Meeker wrestlers win 3 of 5 duals at Colorado Mesa U.

Listen to this post MEEKER I The Meeker High School wrestling team opened its season in Grand Junction, wrestling in the Colorado Mesa University Duals, where the squad won three of the five duals wrestled.

Listen to this post MEEKER I The brackets are set for the 2016 Colorado State Wrestling Championships, and Meeker will have wrestlers in 10 of the 14 brackets, including four regional champions, one of whom […]