RANGELY I Tim Galloway remembers when Rangely football was a big deal.
The first-year head coach hopes to rebuild the program, so that once again the Panthers will be a force to be reckoned with. 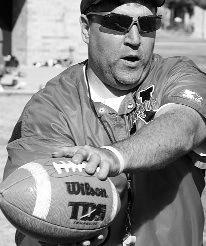 “Oh, we had some great teams,” Galloway said. “The four years I was here (as an assistant), I think we went to state three of those four years. We always had some good talent. It’s just a matter of bringing some of the tradition and pride back.”
Last season, the Panthers won two games and lost seven. So Galloway knows he has his work cut out for him.
“It’s been a long dry spell since we were consistently good,” he said. “Year in and year out, we used to be a team to contend with. That’s what we want to bring back.”
To do that, Galloway has brought in some former Rangely players from the glory days to help out as assistant coaches.
“Mike Cushman and Nick Lancaster were both all-conference, all-state kids for Rangely, so they know what being a Rangely Panther is,” Galloway said. “I want them (the current players) to be proud to be a Rangely Panther. I want them to be proud to wear the green and white.”
Ron Urie, another former Rangely player, is also helping out.
“He’s been a big help,” Galloway said.
Last week was the first week of practice for the Panthers, whose first game is at 1 p.m. Saturday, Sept. 5 at home against the Grand Junction Central High junior varsity team.
“It’s still too early to evaluate a whole lot,” Galloway, who has been putting the team through two-a-day drills before school starts Monday. “We have some athletes at the skill positions. We don’t have any size. We’re pretty small, but the kids seem excited, which is a good thing, because I know the last two years they haven’t been.”
The numbers are higher this year, too, Galloway said.
“We have 30 kids out,” he said. “Last year, we only had 23 or 24 out, so the numbers are up.”
Galloway didn’t find out he was going to be the coach until soon before the start of practice.
“I had like a week, so most other teams in the league will be a little bit ahead of us … as far as kids lifting all summer, and getting to know the kids,” he said.
Galloway was an assistant coach in Rangely in the late 1980s and early 1990s. He has also coached at Hayden High School, Fruita Monument High School and Mesa State College in Grand Junction. This is his first head coaching job.
“Hopefully I can bring my knowledge to these guys and help turn this program around,” Galloway said. “It’s only been a week, but they seem to be catching on. I’ve got some kids who are starting to shine a little bit.”
He mentioned Kindal Cushman and Adam Dahl, as well as Patrick Phelan, Logan Osborne, Zakk Wenzel, Cole Barlow, Brian Rector and Jason Stults from Dinosaur as players who have stood out.
“I’ve got a couple of sophomores, who will help us out as well, who are really hungry,” Galloway said. “There may even be a freshman or two, who may play some varsity.”
The kids struggled last year,” Galloway added. “We’ve gone back to basics. We’re teaching ‘em how to play football all over again. We’ve simplified the offense and defense. They seem to be responding. We’re trying to keep it simple. It’s now how big your playbook is, but how you run ‘em.”
Galloway knows it will take time to build up the program, and with teams like Aspen and Coal Ridge on the schedule, it could be tough going this first season. But he said his players will be prepared.
“It’ll be a good challenge for us,” he said. “We’ll give it our best on the field, and we’ll see where it comes out. I think we’ll be ready, or I’ll die trying.”

Listen to this post RBC — Rio Blanco County will be represented by five high school cross country runners in the state meet this Saturday in Fort Collins. Rangely finished fourth as a team in […]

Listen to this post RANGELY — The Panther football team improved in a couple of areas last Friday against the 2A Coal Ridge Titans. The Panthers fell to the Titans 41-14, so they still have […]

Listen to this post RANGELY I “The defense was excellent,” Panther head football coach Paul Fortunato said about his team’s defensive stand in Dove Creek, securing a 12-8 victory.

OPINION: If you like birds and fish, hug a cow

Editor’s Column: We don’t have to, we get to