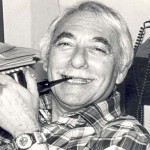 Bern spent his childhood and attended schools in New York City. He was attending New York University when Japan attacked Pearl Harbor, and was one of thousands who rushed to join the armed services. He was a lieutenant in the Army’s 69th Infantry Division and a part of the troops who invaded France on the beaches of Normandy. He was shot by a Nazi within several days, and spent the rest of the war in an English hospital, earning a Purple Heart. Upon his honorable discharge, he returned to New York to work for Bobs Merrill in advertising as an salesman. He was advertising manager of the Daily Sentinel, and also the Palm Springs Desert Sun, the Los Angeles Sun, the Taos News in New Mexico and many others in his long and adventurous life. He is also a past publisher of the Delta County Independent.
Bern and his first wife (Julie) had two children, Scott, and Robin (Ziegler).
He later traveled to California where he met his second wife, Jean, and they had two children: a son Kerry and a daughter Shannon. His third marriage was blessed by two daughters, Tasha and Victoria. His fourth marriage was to Margie (Sisson) Price in Delta, Colo., and they had no children together, but he was a doting and loving stepfather to David and Audrey, Margie’s children. Bern and Margie share numerous grandchildren and great-grandchildren, in a large and loving family. They have lived in Rangely, Colo., for 17 years.
Bern was a past exalted ruler of Rangely Elks Lodge No. 1907. He served the Elks in Lakewood, Colo., and Price, Utah, for 33 years. In accordance with his wishes, there will be no funeral, but he did ask those who think of him to lift a glass to the good times.

Listen to this post Joan Lavelle Wells of Meeker passed away on Oct. 24, 2009, while in the hospital.