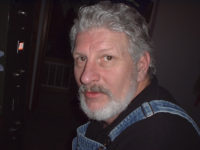 His was a life well lived with adventures and curiosity. His talents were many. If you put a scrap of paper in front of him, he was likely to doodle you a piece of artwork. One of his greatest joys was playing his guitar. He could play country, rock, folk, Flamenco, jazz, blues. Anyone who spent time with Sonny was regaled with animated stories, filled with details about his motorcycle trips, his life going “back to the land” and his precious son, Silkor.

Friends and family always sought his advice when they needed to fix just about anything. There wasn’t anything, or anyone, that he couldn’t make better.

His insatiable curiosity led to his many hobbies because he always wanted to learn about something in as much depth as possible. He saved up and bought his first telescope and microscope before he was 10. He made his first crystal radio even before that. He never lost his interest in the large, the small or taking pictures of anything.

He grew up hunting, fishing and camping and was heavily involved in going to rendezvous’ while Silkor was small. He broke his own land in Missouri and proceeded to build a homestead complete with running water, solar electricity and habitat for the wildlife he loved.

No tribute to Sonny would be complete without mentioning his love of the earth and all the living beings that share our beautiful planet. Animals and small children were drawn to him like magnets. He will be missed by the many people whose lives he touched.

Sonny is survived by his wife Kristine Hicken, son Silkor Schillings, grandchildren Saigen and Katia Schillings, sister Sharla Schillings, and the many people who will always miss him. A barbecue sometime the week of July 4 is being planned so Sonny’s Meeker friends can gather and share their memories of this special man.

In lieu of flowers, please make a donation to HopeWest.

Carl Fredrick Sorensen passed away June 16, 2008, from complications of cancer. He was born April 27, 1922, the second child of Michael and Beatrice Sorensen.

Harold Roy Steele was born in Vernal, Utah, to Don Homer and Margaret Sue Steele on Oct. 22, 1939, at the home of his grandmother, Harriet Steele. He had four brothers and four sisters. Roy […]