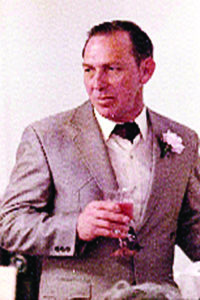 William “Howard” Sutton went home to be with the Lord on Thursday, April 14, 2011, in Grand Junction, Colo.
Howard was born in Cortez, Colo., to Bill and Delia Sutton. They moved to Meeker in 1952. Howard grew up in Meeker and was graduated from high school in 1957. He started his oil field career as a roughneck soon after high school, a career which was a lifelong choice, taking him to multiple U.S. and overseas assignments including Libya, Egypt, Australia, China, the North Sea and Holland, coming back full circle to the Meeker area as a consultant.
Howard is preceded in death by parents Bill and Delia Sutton and sister Joy Stewart. Survivors include his wife of 50 full years, Georgia of Grand Junction; son Fred Sutton of Pagosa Springs; daughter Amber Koontz of Grand Junction. Howard was blessed with six grandchildren that were the love of his life: Alexis Koontz, Amanda Sutton, Jake Koontz, Waylon Sutton, Robert Koontz, Duke Sutton and great-grandson Jason Koontz. He is also survived by brothers Larry and Gene Sutton and sister Judy Rael.
Howard will be remembered as a kind man who was a loving husband and father. He was a very giving man. He attended Frontier School of the Bible and through the years provided funds for many others to attend. He held the Gideon ministry in highest regard and provided for many Bibles to be distributed worldwide.
Howard would be honored with donations made to The Gideons International and/or Our Daily Bread, which Howard read daily. On the day of his death the reading included this verse: “Precious in the sight of the Lord is the death of His saints.” Psalms 116:15.
Howard and Georgia reside at 176 29-1/2 Road, Grand Junction, Colo., 81503, but a memorial service will be held at First Baptist Church of Garfield County in Silt, Colo., on Saturday, April 23, at 11 a.m. and a graveside service at 2 p.m. at the Meeker Cemetery. Please join the family at Kilowatt Korner following the service.

RBC | The Rio Blanco County Fair Board will have a meeting at 6 tonight at the fairgrounds.

Letter: Narcissism at the heart of protests

On one of my favorite communal Web sites this past week, I engaged a discussion on “narcissistic people.” I started this conversation because of the contemptuous, disdainful conversations I hear every day. It is in […]