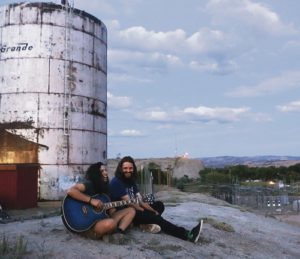 June 24 marked the first TANK dinner and concert for local and visiting Kickstarter donors who helped “Open the TANK” in February, an effort that raised more than $61,000 by nearly 700 donors worldwide.
The next day, the TANK hosted its first regular “Open Saturday” event which, from now through October, welcomes visitors to the TANK every Saturday from 9 a.m. to 1 p.m. and 6 to 9 p.m.
June 25 also heralded a front-page Denver Post article about the TANK and a CBS Sunday Morning film crew’s arrival to tell the story, scheduled to air in late July or early August, of the TANK’s decades-long appropriation by locals and out-of-town musicians before being “saved” as a Center for Sonic Arts—a designation nobody had ever heard of, much less ventured to create.
Other elements of Solstice Week felt less structured. Like the way Rangely residents—some of them returners to the TANK; others experiencing it for the first time—responded to the space’s acoustical reverberation in tandem with the dozen or so professional musicians and sound artists in town for the week’s events.
Siblings Courtney Nickson and Kristiana Perry, 15 and 11, had heard about the TANK from their parents, Colt and Pheobe Nickson, since the Nicksons had attended a TANK Open House at last year’s Septemberfest.
Like many first-timers to the TANK, Phoebe Nickson’s initial skepticism of the TANK was overwhelmed by new impressions upon entering the sound space.
“It’s an experience,” Nickson said. “It’s a feeling that’s intense, that’s cathedral-like. It’s mesmerizing.”
Her stepdaughter and daughter weren’t so sure. They brought their flute and clarinet to the June 23 open house along with doubt written plainly on their faces.
“When I first heard about it, I didn’t think it was that cool,” Courtney Nickson said. “We’d driven past it a few times and I was like, ‘Uh-uh.’ My stepmom had some videos of people singing in it, so it was a little more cool after that.”
Like Phoebe, Courtney Nickson needed time in the TANK to draw her own conclusions. She and Perry played a few notes, marveling at how sounds separated themselves from the instruments, curlicueing skyward and trending toward an omnipresent “E.”
Fascinated, they continued experimenting, taking turns with familiar songs. Over the next two hours, they learned that rather than play notes at tempos, the reward was in drawing them out, thereby slowing their playing and listening. Notes hung, suspended, in the vastness, rather than drowning each other out.
Eventually, Boulder-based clarinetist Dexter Payne wandered into the space, adding a sweet bluesy harmony to the girls’ tunes. Later, he caught up with them, speaking to them in turn.
“He talked to Kristiana about playing more, and I really think it encouraged her,” Phoebe Nickson said. “He said she had a lot of talent for being so young. He didn’t want to be the center of attention at all. He was just there to do what everyone else was doing.”
For Courtney Nickson, playing in the TANK was a transcendent experience, unlike anything she had ever done. She returned later that week to play a multi-part flute piece with herself, a sort of quartet for one. She will return again with her sister, she said, with new instruments and more plans to explore the space.
“I was absolutely shocked,” she said. “I had never seen any videos of instruments being played in there. When I played, it made everything sound a million times better than what it was—my tone, my vibrato. It was breathtaking for me.”
Rangely resident Mary Dillon, who also visited the TANK for the first time during a Solstice Week open house, makes no claims to musicality. Yet her experience in the TANK was similarly profound.
“I’m not sure if it was the sounds, the people, the serenity I felt or just a combination of all of that,” she said. “I felt as though I had deprived myself of something so very beautiful and inspiring for way too long.
“It may take just as long for me to belt out a tune, but some day…,” she added, laughing.
That residents and musicians alike join in harmony at the TANK, despite whatever cultural, political or geographical distance might otherwise separate them, is a recurrent theme for Friends of the TANK organizer Lois LaFond.
“It’s the communion between the people that has surfaced as the most important service the TANK has provided,” LaFond said. “Friday, Saturday and Sunday proved that to me, as professional musicians from San Francisco to New York shared the stage equally with Rangelyites.
“Four ladies from Rangely, Texas and Boulder blended vocal harmonies,” she said. “Children from the town made wonderful animal noises while world-class musicians brought instruments from all over the world, instruments that may never have been seen in the town before.
“My takeaway is this partnering,” she said. “It’s the real symbol of the success of the TANK.”

Family Time at The TANK Saturdays

RANGELY | The TANK Center for Sonic Arts is instituting Family Time at the TANK on Saturdays from 3-5 p.m. During these hours we will offer one family at a time their own half hour […]