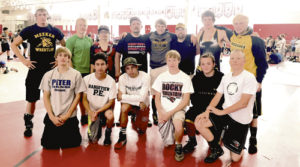 MEEKER I The Cowboy wrestling team defeated Moffat County in its first home dual of the season last Friday, then won two of three duals in Coal Ridge Saturday last.

MEEKER I The Meeker High School wrestling team finished third in the Screamin’ Eagle tournament Saturday in Paonia, then pinned the Bulldogs seven times to win a dual in Craig on Tuesday. Tonight the Cowboys […]