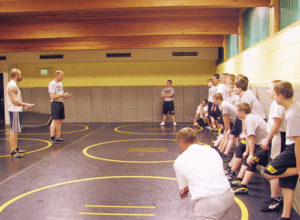 Meeker’s head wrestling coach J.C. Watt has been asking former Meeker wrestlers to speak to his team about ways the lessons learned in wrestling have helped them later in life. Meeker assistant coach Lee Overton had the pleasure of introducing his younger brother Jeff, who was a state runner-up as a senior on the team. The younger Overton served five years in the U.S. Navy, including a tour in Afghanistan. Overton, now out of the Navy, lives in San Diego, Calif.

MEEKER I The Meeker wrestling team has a new head coach and last week he took eight of his wrestlers to Paonia for a team tournament.