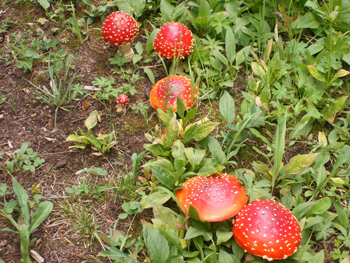 While hiking to upper Marvine on Aug. 10, Shawn Luce stopped to photograph these mushrooms on the side of the trail. Brushing aside greenery to get a clearer view, her right hand touched the top and underneath of one of the mushrooms. An hour later, her hands tingled, and by the time she reached the parking lot they were swollen to twice their normal size. “At home, I washed carefully and took a Benadryl, and within a half hour was recovering,” Luce said. “These are probably Amanita Muscaria, also known as Fly Agaric or Fausee Oronge (from the
website www.rogersmushrooms.com). I understand these appear at other sites, too, so a warning may save someone a problem.”

So, you’ve resolved to eat healthier in 2011. Now what? Pioneers Medical Center can show you how RBC I ­Each year, countless Americans resolve to make eating healthy a priority. While many do it with […]

RBC | During December 2009, the Rio Blanco County Communications Center logged 588 incidents, down from December 2008 totals of 823, which is a 28.6 percent decrease in activity.