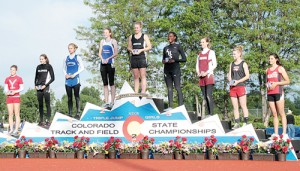 • Rio Blanco County was well represented in dashes, distances, jumps, throws and puts in Denver’s Jefferson County Stadium last weekend for the 2012 Colorado State Track and Field Championships. Many returned with medals, including two golds for Meeker senior Kathryn Doll, who also anchored and medaled in relays. Rangely junior Holly Lepro was one step away from the top of the podium in the shot put and placed third in the discus.
• Special district voters on the western end of Rio Blanco County approved a mill levy increase for the Western Rio Blanco Recreation and Park District, creating a partnership with Rangely School District, as well as voting in two new board members. Voters on eastern end of the county elected three new directors to the Eastern Rio Blanco County Health Service District and voters elected two to the ERBM Recreation and Park District. The WRBM ballot question asked voters to approve a .75 mill levy increase, expected to generate more than $320,000 in the first year and sunset in 2016, with the generated funds designated to cover the costs of athletics and other extracurricular activities for the local school district. Voters approved the ballot question by 35 votes, with 338 voting “yes” and 303 voting “no.”
• Jeannette and Chad Shepherd are the new owners of Shepherd’s Office Outfitters, formerly Jackson’s Office Supply on the southwest corner of Sixth and Main streets in Meeker. The new entrepreneurs offer Radio Shack electronics, Union cellular service, office supplies and even travel services. Red Fox IT also offers its computer services from the Shepherd’s Office Outfitters’ store.
• After a successful season on the mat, two University of Wyoming wrestlers were honored for their work in the classroom. Senior Joe LeBlanc and junior Alfonso Hernandez were named to the 2012 National Wrestling Coaches Association All-Academic Individual Team. They are part of a list which totals 87 student-athletes, five NCAA champions, three NCAA second-place finishers, 23 All-Americans and 77 NCAA qualifiers.
• Everyone was all smiles, including Pioneers Healthcare Foundation executive director Margie Joy and Meeker local Matt Holliday, for the fifth annual scholarship — Monte Carlo V – A Night Under the Big Top.” More than 200 people enjoyed the dinner, catered by Ma Famiglia, music and casino games and according to Joy, more than $7,000 in scholarships were awarded. “The scholarship event is just one aspect to raise awareness about healthcare careers and further develop our local healthcare workforce, an important component of sustainable healthcare,” Joy said. Proceeds from the event also helped the 2012 Range Call, MHS volleyball program, MHS shop program and the Meeker Lions Club. “We appreciate all the community support and involvement to make this program such a success,” Joy said.
• It was in 2006 that math teacher Rory Wilson began to build a boat that was strong enough to drag around, shallow and light enough to get into places other boats cannot, and strong enough to run with an ocean storm. Six years later, Wilson is ready to complete a solo passage across the Pacific Ocean in a small, custom boat that uses kite sails and rowing for power.
• Natural Soda held a groundbreaking ceremony for a $30 million expansion, which was attended by several local and state officials, including Colorado Governor John Hickenlooper. “Today we stand here to break ground on a $30 million investment in not only a facility and our employees but the community here in western Colorado,” Brad Bunnett, president of Natural Soda Inc., told a large crowd gathered at the Natural Soda processing facility in the Piceance Basin. “Two thousand feet beneath us where we stand right now is a world class reserve of naturally occurring sodium bicarbonate and in the current facility we process, package and deliver to market more than 125,000 tons and the market continues to grow.”
• Rio Blanco County elected two new county commissioners in the 2012 Republican primary election. Jeff Eskelson defeated incumbent Kai Turner and Jon D. Hill defeated Chris Brasfield to fill the seat vacated by Ken Parsons. The two new commissioners will be seated in January 2013.
• “Whereas, a committee formed in Rio Blanco County to promote economic development and increase tourism by providing for the operation of off-highway vehicles in Rio Blanco County and Northwest Colorado, made a presentation to the Town Board of Trustees (Town Board) proposing the Town consider the adoption of legislation permitting the operation of off-highway vehicles within the Town of Meeker, in conjunction with such an effort in Rio Blanco County and Northwest Colorado;” reads the opening of Ordinance No. 7-2011, recently adopted by trustees of the town of Meeker. Officials in Meeker, Rangely and Rio Blanco County want it to be known they are “OHV-friendly communities” but there are rules.
“We are trying to participate in a regional concept,” said Meeker town administrator Scott Meszaros.
• More than 300 Rio Blanco County Pioneers Association members, including many former Meeker residents from across the nation, traveled to Meeker for the centennial celebration of the “Old Timers” Reunion Dinner and Dance on Saturday, June 2 at the Fairfield Community Center.
• More than 30 people attended the Kenney Reservoir Fishing Derby last Saturday and the fish were biting. The annual fishing derby is sponsored by the Rio Blanco Water Conservancy District and the Colorado Parks and Wildlife Division.
• Eveyln Metzger was the Oldest Pioneer Lady at the Old Timers Centennial Celebration dinner and dance, one year shy of her own centennial celebration.
• The Rio Blanco County Board of County Commissioners adopted a resolution to imposed a ban on open fires in the unincorporated areas of Rio Blanco County. The fire danger is high due to lack of precipitation and extremely hot and dry conditions.

• Three Meeker Destination Imagination teams qualified for the Global Finals in Knoxville Tenn., in May. The third-grade team is in the front row; the fifth-grade team in the middle row; and the sixth-grade team […]

RBC I The following review was provided by Rio Blanco County staff. Facebook Notice for EU! You need to login to view and post FB Comments!

RBC I This week we will look at news and events that took place between June and December 2014. Facebook Notice for EU! You need to login to view and post FB Comments!