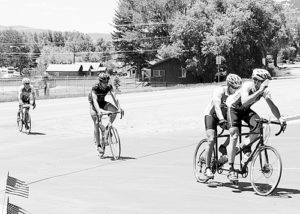 • Rio Blanco County became a stopping point last week for the Road to Discovery ride and the Sea to Shining Sea tour, two cross-country cycling events. While the causes were different and the participants were headed for opposite coasts, both rides symbolized hope — whether for a cure, a breakthrough, or a new beginning.
• A formal ceremony marked a $100,000 donation by the Chevron Corporation toward the purchase of two new Rangely Rural Fire Protection District (RRFPD) fire trucks. The Rosenbauer tanker/pumper and aerial trucks, which are currently under construction in Sioux Falls, S.D., and will be delivered in December, are replacing trucks built in 1977 and 1983.
“This is the single largest purchase we’ve ever made. We knew we couldn’t purchase trucks outright without depleting our reserve,” Fire chief Andy Shaffer said. “We started soliciting oil and gas companies, among other possible funding sources, and we didn’t really know what to expect. Needless to say, (the Chevron donation) was a big surprise.”
• ­The annual White River Community Association’s fish fry is an opportunity for people to visit and enjoy deep-fried whitefish at the historic Buford School. An informational kiosk has been placed outside the Buford School, which in 2006 was listed by the state of Colorado in the Register of Historical Properties, as did Rio Blanco County.
• Rio Blanco County elected two new county commissioners in the 2012 Republican primary election. Jeff Eskelson defeated incumbent Kai Turner and Jon D. Hill defeated Chris Brasfield to fill the seat vacated by Ken Parsons. The two new commissioners will be seated in January 2013.

Listen to this post • A suspect placed in custody at the Rio Blanco County Jail was charged with robbing Mountain Valley Bank at Fourth and Main Streets in Meeker, according to the Meeker Police […]

Listen to this post RBC I The following review was provided by Rio Blanco County staff.