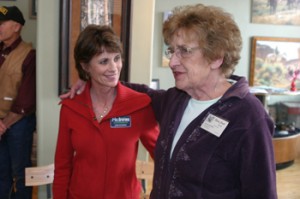 MEEKER I For Lori McInnis, it was a homecoming.
Formerly Lori Smith (her maiden name), the wife of Republican gubernatorial candidate Scott McInnis returned to her old stomping grounds Sunday for a political meet and greet at Fawn Creek Gallery, co-sponsored by Avis’ Village Floral.
“This is a good thing for me,” Lori McInnis said of the Meeker visit. “I love to come home.”
Lori McInnis has actually been back home two weeks in a row. She was part of the Lincoln Day event Feb. 27 at Ma Famiglia.
“I hadn’t been back in awhile (before that),” McInnis said. “We started this (campaign) over a year ago.”
Her husband Scott wasn’t with her Sunday. He was at a similar event in Denver.
“I am a Meeker woman,” Lori McInnis said. “This is actually where I met Scott 25 years ago.”
Lori took her turn, along with the other candidates at Sunday’s meet and greet, to talk about her husband’s qualifications to become Colorado’s next governor.
“He is so well-rounded,” Lori McInnis said. “He has private business experience, combined with the state experience serving in the Legislature for 10 years, and he has the federal experience for 12 years (as a U.S. congressman). I think that’s what’s needed.
“You’re going to have to have someone who understands that whole realm, in order to help our state get back on its feet. … Knowing how to represent people, it takes a lot of special qualities. It goes along with being accountable. And that’s his record … you can say a lot of things, but the record is what is your proof. To me, that’s what’s real. I hope it’s real for you.”
Her husband’s opponent, fellow Republican Dan Maes of Evergreen, made his first visit to Rio Blanco County on Sunday.
“You know, this was one of my main reasons for coming, because I have never been to this county, never been to Meeker,” Maes said. “I can say now I’ve been to all 64 counties in the state.”
Maes recognized he was treading into McInnis country.
“It’s not only Lori’s territory, but it’s Scott’s old congressional territory,” Maes said. “I know he has a lot of old, loyal supporters around. But there are also a lot of people looking for something new and fresh.
“With me, you’re going to get a conservative. A man of faith, who is not bashful about it. I believe in the sanctity of life. I believe in a marriage between a man and a woman. I believe in one reason to own guns, it’s called the Second Amendment,” Maes said. “But these are not the primary issues in our state today. The real issue is our economy and jobs … we need to maximize our energy revenue. (Gov.) Bill Ritter and a couple of his friends chased the energy industry out of this state. Shame on him. My first priority is to go beg forgiveness from those energy companies and say we really messed up. We want you back.”
While visiting Rio Blanco County for the first time, Maes said he appreciated the hospitality … even if it met venturing into the hometown of his opponent’s wife.
“I have spoken with her brother David Smith (county Republican chairman), and he has been very gracious and very inviting. Her family has been very kind to me,” Maes said. “That’s what I love about this process, is we can all agree to disagree and still work together.”
And that political process will lead up to the primary election in August.
“So far, so good,” Lori McInnis said of the gubernatorial campaign. “But it’s early. It’s only March. We have a long way to go.”