MEEKER — Although several of the 26 teams competing in the annual Ladies’ Deerfly scramble tournament were from Meeker, it was the visiting golfers who took top honors last Saturday at the Meeker Golf Course.
“There were some good golfers playing today,” Meeker golf pro Jim Cook said of the tournament. 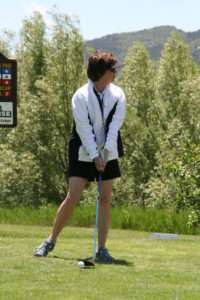 The best team on the course was Deanna and Loren Forney. The mother-daughter team from Grand Junction shot a one-over par 65 for the best gross score. Susan Nicholson and Meghan Innes traveled from Craig to play and finished four strokes behind the leaders and two shots ahead of Nicholson’s daughters Amber and Heather. Rifle’s Tami Holt and Pam Buerger shot a 73 for the fourth-best gross score.
Rangely’s Cori and Trilby Elam tied for first-place honors, with Janice Armstrong of Grand Junction and her partner Laree Lovan of Rifle, with both teams finishing with a net score of 55.
“It’s amazing what women can do,” Cook said. “One of the Elam girls from Rangely is five months pregnant and they still won a golf tournament,” Cook said, explaining how it might help in the balance of one’s swing.
Julie Gortsema and Michelle David of Glenwood Springs had the third-best net score (56) and Dorleen Byers and Donni Cochran, also from Glenwood Springs, finished fourth with a net score of 58.
The Meeker Golf Course will be busy Father’s Day weekend, with the 25th annual White River Electric Association invitational tournament played before the two-day, two-man best ball tournament June 20 and 21.

MEEKER I There will be two different tournaments for golfers of all levels this weekend in Meeker.

MEEKER I Siblings Eddie Rubin and Amanda Back trailed Mitch Carter and Tami Holt by three shots after 18 holes of play in the annual two-day couples tournament. However, after the second day, the siblings […]