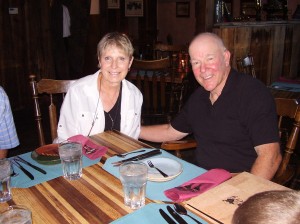 RANGELY | Joel and Sarah Hogan celebrated their 50th wedding anniversary Sept. 26, 2010, with a small gathering of family and friends at the Winery Restaurant in Grand Junction.
The couple was married in Rangely on Sept. 23, 1960. They met when they were in the first grade in the Rangely public schools and both were graduated from Rangely High School in 1960.
Sarah Hopkins Hogan retired from Rangely District Hospital after 40 years of service. She currently works part time in the medical records department. Joel retired from the Rangely School District after 32 years of service as junior high math teacher, coach and high school athletic director.
They have two children: Todd Hogan and wife Stephanie of Rangely, and Drew Hogan of Battlement Mesa.
They spend much of their time keeping up with their four grandchildren: Audrey (18), Aimee (14) and Chris (12) of Rangely and Kellan (12) of Missoula, Mont.

RANGELY I Coaches are always looking for improvement. That’s why Derek Stolworthy, the Rangely Junior High wrestling coach, couldn’t be happier with his team. “Throughout the course of the season, it was like night and […]

Panthers shut out in Shootout

RANGELY I “We had a tough matchup right out of the gate,” Rangely boys’ basketball coach Eric Hejl said of the first round of the White River Electric Cowboy Shootout. The Rangely boys’ team opened […]

The Rangely Rock Crawlers would like to thank the following companies for their support and donations we received for the event: