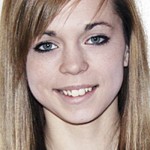 RANGELY I Local teen Dakota Kenney has been playing volleyball since the third grade. Now a senior at Rangely High School, Dakota has been recruited to play with the Split Mountain Volley Ball (SMVB) Club in Vernal, Utah, along with classmate Torie Slagle. SMVB is sanctioned by the USA Youth and Junior Olympic Volley Ball Association and are developing players that can compete against the “big city” teams.
Kenney has had a successful high school volleyball career. She made the varsity team her sophomore year and has lettered three times. Kenney has gone to the state tournament in the game twice, her sophomore and senior years, as well as making All-League Honorable Mention twice. As well as being an excellent athlete, Kenney is on the A-B honor roll and likes to spend her spare time with her horses.
Last year, the SMVB team was invited to play in Rangely at their annual tournament and that is when coach Doris Salazar met the Rangely girls.
The girls on the SMVB team and their coach were so impressed with Kenney and Slagle they invited them to play on the team when their high school season was over. Kenney and Slagle began practicing with their new club team in December and Kenney has played in two tournaments with the team.
Slagle plays on the high school basketball team, so she is unable to play in the volleyball tournaments with her teammates; coach Salazar is “anxiously waiting for her to be able to play” at the end of her season.
The team has quickly moved from “elite” to “power” status, the highest division in the league. They have played in two major tournaments and are currently undefeated.
Coach Salazar said, “Dakota has done a phenomenal job and they have won several close games because of her jump float serve.”
The team practices in Vernal three times per week, for two to three hours and has a scrimmage each month.
Dakota says, “I get pretty into the game when I play.”
As for Dakota Kenney’s future, she hopes to get a volleyball scholarship to CNCC and eventually move on to Mesa State to study child psychology. Her long-term goal is to become a doctor in the field.

RANGELY I For the first three weeks of August, Armando Lopez and his team from Elite Environmental Services will be doing asbestos abatement and demolition to clear the area of the last portions of asbestos […]

One of rare Rock Park birds has been found

To the Rock Park Curators, I think we may have located one of your rare birds three blocks due west of their new home under construction at Silver Sage RV Park. This rare bird has […]