RANGELY — After a tough loss against Coal Ridge, one of the top teams in the region, the Panthers took the field again Thursday against the visiting Roaring Fork Rams. 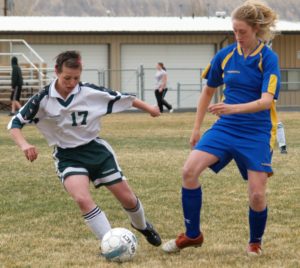 The Panthers are a young soccer team with 11 underclassmen. Six sophomores including Mikayla Shoenfeld, Rosalise Coombs, Kendall Wilson, Kelsey Harvey, Rose Peterson and Torie Slagle, and freshmen Monica Briggs, Hunter Schaeffer, Katelyn Carlson, Alexsis Silva and Haley Enterline.
“It’s been a building year for the team,” said head coach Kris Denny, “I have seen a lot of improvement from all of the girls especially with how short our season has been.”
Thursday against Roaring Fork, the team played tough defense, allowing just eight shots against senior goalkeeper Hillary Hayes.
“Our strength this year is our defense, they can hold their own,” commented Denny.
There are only two other seniors, Heather Wanstedt and Meagan Piering, and a third if you count team manager James Herrera.
The Panthers dominated the Rams in their own end for much of the game on Thursday afternoon. Torie Slagle scored the first goal of the game, assisted by Rosalise Coombs. A bit of senior experience came into play on the second goal when Wanstedt set up a perfect corner kick right to the waiting skull of Piering, who butted it past the Roaring Fork goalkeeper.
Rangely won the contest 2-1, making their conference record 1-3-0 so far this season.
“Our win against Roaring Fork, I hope, was a big boost for the girls,” Denny said.

RANGELY — One day after having to clear snow off the track, Rangely High School hosted its annual invitational track meet last Saturday.

Jason Brenton knocks out Pat Reeves in first round

RANGELY I Jason Brenton, who was graduated from Rangely High School in 2005, was in the main event at Cage Wars XVI at Brownson Arena in Grand Junction. Brenton didn’t disappoint his family or many […]

RANGELY — Teresa Broderick won the 2008 women’s club championship on Saturday afternoon when she beat five-time defending champion Ellen Boudreaux by only two strokes. Broderick also had no birdies in the 18-hole contest, while […]