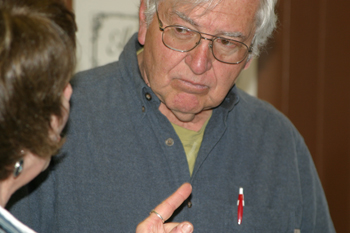 RBC I Redoing the county’s master plan is still in the, well, planning stages.
“This is a work in progress,” said Ryan Mahoney of Central Mountain Planning, one of the consultants for the project.
Mahoney and Davis Farrar, another consultant with Western Slope Consulting, reviewed a draft version of the county’s 60-page master plan recently at a brown-bag luncheon at Cuppa Joe in Meeker. The March 18 event was sponsored by the Meeker Chamber of Commerce. A similar public meeting was held later that night at the county administration building.
“The process of public input is not over, so there’s still opportunity to do that,” Mahoney said. “Our information is only as good as what you folks tell us. It certainly helps us to have input.”
A copy of the draft version of the master plan is available on the county’s Web site: www.co.rio-blanco.co.us. Future public meetings will also be scheduled in both Meeker and Rangely, though turnout has been spotty at past meetings.
“Meeker is pretty good about showing up; Rangely is a slightly different story,” Farrar said at the March 18 chamber-sponsored brown-bag lunch. “So that’s why we’re meeting with you folks today. We’re trying to do some more outreach. This is just another way to try to get people excited and engaged.”
The cost for updating the master plan is about $130,000, with about $100,000 coming from a grant from the Colorado Department of Local Affairs, and the county contributing the rest. The project, which began over a year ago, was originally expected to be completed around the first of the year.
“May or June is probably our final wrap-up timeline,” Farrar said.
The redoing of the master plan has included a survey of county residents and interviews with county staff and stakeholders. An advisory group was also appointed.
“From the information we collected, we identified issues and opportunities, which are included in the document,” Farrar said. “Because this is the people’s document, truly.”
The master plan, which, ideally, is updated every five to 10 years, serves as a guide for county growth and planning. The last update of the county’s master plan was in 1999.
“This is a guiding document,” Mahoney said. “It is kind of a blueprint to use for planning the future of the county … and for land use decision-making.”
The master plan will include guiding principles “that sort of frames the issues,” Farrar said. “From the guiding principles, we have a series of goals. Under the goals, we have policies. Those policies are really directed at action, to fulfill the goals.”
As the process for finalizing the county’s master plan moves closer to completion, there is still time for public input, the consultants stressed.
“If there is a message here, it is please be involved, please be engaged,” Farrar said. “As we move forward, we would like to be able to say, whatever the final document is, this reflects the values of Rio Blanco County.”

Listen to this post RBC I Editor’s note: In advance of party caucuses March 16, the three candidates, all Republicans, vying for a seat on the Rio Blanco County Commission, which will be vacated by […]

Listen to this post Editor’s note: In an effort to keep residents informed on happenings within county government, county employees will contribute biweekly articles for “The County Cubicle.” These articles may include responses to reader […]