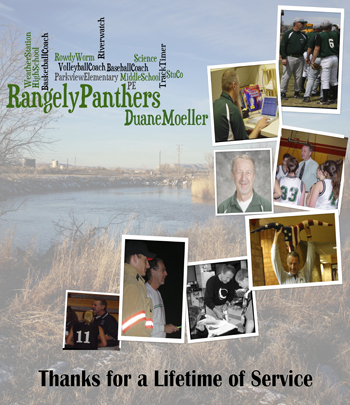 RANGELY I In any profession, assistants are often the key to success – the people working behind the scenes who benefit the organization. Duane Moeller has been an assistant coach and teacher for the Rangely School District for 17 years. He has been in education for 35 years altogether and he has truly dedicated his life to kids.
Moeller began his career in Branson, Colo., where he coached high school volleyball, boys’ and girls’ basketball at both the high school and middle school levels and track for four years. He also taught PE, health, driver’s education and biology.
Moeller moved to Moffat, Colo. where he continued as an all-around coach for two years as well as a multi-subject teacher before moving to Copeland, Kansas for a three-year stay.
He continued coaching three sports and added two new subjects to his teaching credentials. In Jennings, Kansas he maintained his remarkable run of year-round coaching with volleyball, boys’ and girls’ basketball and track. He taught eight different classes in his nine years and had a profound impact on many kids in Jennings.
He moved to Rangely in 1994 and coached volleyball for 14 years, basketball for 16 and baseball for seven. He has taught seventh- and eighth-grade life and earth science, high school physical science and a year of elementary science.
“Which, as it turned out, I dearly loved‚“he said.
Moeller was a member of the Colorado Association of Science Teachers, in the quarter classes led by Science Olympiad for 16 years and River Watch for 15 years. This totals 35 years of coaching three or more sports per year and nearly 15 different subjects taught.
Moeller played at California State Polytechnic University, Pomona (CAL POLY, Pomona) for a short time and said, “Coach was fair but when you’re playing against someone who could stand flat-footed and dunk behind his head – I’m sunk.” He added about his time there, “I learned more about basketball in one year from Coach Stull then I had learned in all of high school.”
It was this knowledge of the game, and all sports, in addition to his outstanding organizational skills that made Moeller such an incredible assistant coach.
Current Rangely girls’ basketball coach Jimmie Mergelman said, “He is a great guy that has a ton of knowledge in every sport. He was a great asset to have as an assistant.” He has coached with several coaches over the years and each coach would no doubt echo Mergelman’s words, as Moeller is absolutely in it for the kids, and his assistance in any sport was appreciated.
Moeller served as the track meet clerk for high school and middle school meets and was in control of maintaining a safe and efficient meet that provided great experiences for the competitors. He always spoke highly of the head coaches he worked for and complimented the kids in the program. If he ever had a question about the way a tournament was run or the games to be played it was because he cared about the kids involved. He always held the kids’ best interests at heart and demanded the best of them and for them.
The current principal at Rangely, Berry Swenson, said of Moeller, “He is a wonderful and well respected science teacher. I wish I could have worked with him longer.”
The current Meeker High School Science and math teacher, and Region 3 president of the Colorado Association of Science Teachers and long-time friend Beverly DeVore-Wedding said, “Students, whether in the classroom or in sports, are his life.”
It is obvious from the praises of his peers that Duane Moeller has played an incredible role in the success of Rangely athletics. He has given 35 years of his knowledge and dedication to student/athletes and he has done it in a way that demands no accolades, simply more kids to help.
Moeller has taken a medical leave this year and his presence is certainly missed by the students and staff.

Rod Harris was a cop. He didn’t consider himself a writer. “Are you kidding me?” said Harris, who grew up in Rangely and returned in 2006 after his retirement from the Las Vegas Metropolitan Police […]

RBC I After six weeks, including jury selection, testimony and five days of jury deliberation, Judge Gail Nichols declared a mistrial in the Jerry Snider Jr. murder trial. A new trial has been set to […]