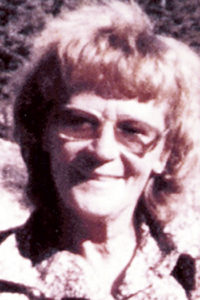 Alma B. “Dinky” Tucker, of Craig, died Friday, May 20, 2011, at The Memorial Hospital. She was 85.
Dinky was born Aug. 27, 1925, in Salem, N.J., the daughter of James and Anna (Plumer) Baker. She was raised in New Jersey until she was 19 and she then moved to Denver and eventually to Craig in 1946 or ‘47.
Dinky lived in various other places including Grand Junction, Carbondale and Dove Creek, Colo., and Apache Junction, Ariz., prior to returning to Craig a year ago.
Dinky was married to Robert E. “Bib” Tucker and they became the parents of two boys.
They were later divorced. Dinky then became the companion of Jerry Almber whom she was with for more than 30 years.
Dinky worked as a bartender, owner of the Mode O’ Day dress shop in Craig and as a maid and eventually maid superintendent at Snowmass at Aspen. She enjoyed fishing, hunting, skiing, shooting pool, playing shuffleboard, riding bikes, sewing and making dolls. She was a member of the Ladies Auxiliary of the VFW.
She is survived by her son Bruce Wood of Craig, Colo.; her grandchildren Darin and his wife Kari Roush of Jensen, Utah, and Kellie Crawford of Meeker, Colo., and her great-grandchildren Brett Roush and Kami Manning both of Jensen.
She was preceded in death by her parents, her brother Jim Baker, her sons Robert E. “Bobby” Tucker Jr. and Brett Tucker and her husband Jerry Almber.
She loved her boys and worked very hard to take care of them. Her boys never went without. Mom was great, the best and we loved her and will miss her very much.
Take care of Mom, boys, I miss you all.
Cremation has taken place and memorial services were held on Thursday, May 26, 2011, at Grant Mortuary Chapel with Mervin Johnson officiating. Interment of her cremains followed in the Craig Cemetery.

Listen to this post RBC I It’s that time of year again. When Rio Blanco County officials are hammering out the details for the next year’s budget. And it’s not a pretty picture, at least […]

BOCES board meeting set for March 31

Listen to this post RANGELY — Rio Blanco BOCES will hold a regular board meeting on Tuesday, March 31 beginning at 7 p.m. in the Rangely School District Board Room, 550 River Road to discuss […]

Listen to this post ANNOUNCEMENTS ATV, Boat and Snowmobile Owners! You can now renew your Colorado OHV registrations on line at: www.parks.state.co.us 44444 The Rio Blanco Herald Times accepts all major credit cards. You can […]