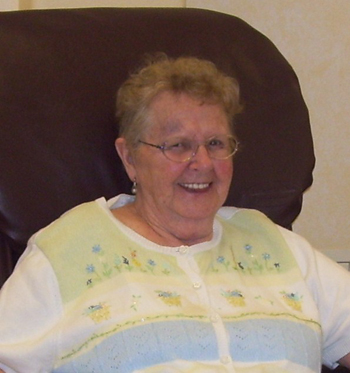 Anita (Tiny) June Usery was born June 13, 1929, in Boulder to Lowren and Minnie Osborn. She left our presence to enter into heaven, her ultimate goal, on Oct. 11, 2009, at St. Mary’s Hospital in Grand Junction after a brief illness.
Anita was married to Frank Paul Usery on May 4, 1947. They lived in Rangely until 1985, when they retired to Grand Junction. The two were blessed with 62 years of love and shared a life centered around their family. Anita spent most of her childhood in Kirksville, Mo. While in her late teens, she enjoyed working on a naval base in the Mohave Desert during WWII. She later worked as a medical receptionist; however, what Anita took the most pleasure in was raising her and Frank’s six surviving children, Paula (Walter) Spetter, Grand Junction; Burt (Lorna) Usery, Greeley; Catherine Sheridan, Grand Junction; Spencer (Kim) Usery, Grand Junction; Michelle (Chris) Huber, Rangely; and Alisa (Jeff) Hill, Wichita Falls, Texas; 16 treasured grandchildren and 12 precious great-grandchildren; one brother, Larry (Flo) Osborn, Brookfield, Mo.; two sisters Marcella (Vernon) Cox, Heber Springs, Ark., and Sandra (Don) Fleming, Louisville, Colo., and numerous nieces and nephews. She was preceded in death by her great-grandson, Carson James Spetter.
Anita enjoyed reading, crossword puzzles, knitting and time spent in prayer. She was a member of Catholic Daughters, St. Joseph’s Council of Catholic Women and the Rangely Day Picnic Committee. She also enjoyed volunteering at Catholic Outreach. Anita was a wonderful wife and an exceptional mother. She took great delight in visiting with others, had a witty sense of humor and was quick to see the good in everyone. She had a special way of seeing the sunshine in any of life’s storms. Anita gave to all the priceless gift of faith through the example of her life. Her family was blessed to be loved by her and to have had the opportunity to love her. She said to be a success in life one had to have the love of your family and the respect of your friends.
Funeral Mass was held at St. Joseph’s Catholic Church on Thursday, Oct. 15. In lieu of flowers, memorial can be made to Catholic Outreach.

RANGELY | The Rangely Panthers hosted the Dove Creek Bulldogs for their home opener this past Friday. The Panthers and Bulldogs did not disappoint the fans with both having a great back and forth showing. […]

Witherell is state champ at 152 pounds