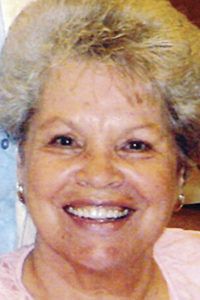 Lee Carol Melton Leavitt, 70, mother and grandmother, passed away of natural causes on Wednesday, Dec. 14, 2011, at Lakeview Hospital in Bountiful, Utah. “Carol” as she was known to her friends and loved ones was born in Spartanburg, S.C. on Aug. 22, 1941, to Woodrow Lee and Helen Louise Johnson Melton.
Carol met Lowell Smith Leavitt in the summer of 1957, and they were married on Aug. 3 of that year. She was a convert to the Church of Jesus Christ of Latter-day Saints. Later Carol and Lowell’s marriage was solemnized in the Salt Lake City Temple. Carol was a homemaker and raised four children. She also worked for Bell Telephone Company in Rangely, Colo.
Carol enjoyed sewing and cooking for her family. She was a good homemaker. Through the years, Carol also served in a number of church callings including the Primary and Relief Society. She had a serious, lifelong interest in reading. She favored church and country western music and enjoyed shopping.
Carol is survived by her daughter Diane (Brandon) Booth, grandson David Lowell Leavitt, brother Rick (Shirley) Eubanks, sister Debbie (Kenny) Turner, Aunt Elsie Elder, cousins Norma Jean Stephans, Teresa Elder and Jerry Elder, and sisters and brother by marriage Kathleen (Danny) Robbins, Patricia C. Walker and Mitchell John (Colleen) Clark, and several nieces and nephews.
She is preceded in death by her husband Lowell, and children Darrell Smith Leavitt, Denise Leavitt and David Lowell Leavitt.
Funeral services were held Tuesday, Dec. 20, 2011, at the Blackburn Vernal Mortuary with a viewing prior to services. Burial was in the Vernal Memorial Park under the direction of the Blackburn Vernal Mortuary.

Listen to this post Carl Fredrick Sorensen passed away June 16, 2008, from complications of cancer. He was born April 27, 1922, the second child of Michael and Beatrice Sorensen.