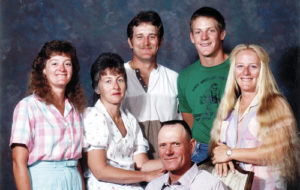 RANGELY I The Rio Blanco County Fair got underway last weekend with the horse events. Within every event lies a history of volunteerism aimed at making that event a great learning experience for the children. It is fitting that Walter and Patty Powell’s names were highlighted in this arena as Patty helped run the horse portion of the fair for nearly 20 years and served on the fair board for 12 years. Patty and Walter are both from families with a great deal of history in Rangely and are known well for their hard work and experience and knowledge in the horse industry.Patty Persafield is the daughter of Raymond and Mossy Percifield and the sister of  Betty (Hayden) and Sandy. The family lived in Gillette, Wyo., when Patty was born and then moved to Windover, Utah, where she started school. She recalls the hills around Windover as great places to play that seemed so big to her back then. The Percifields moved to Rangely in 1947, when someone talked her dad into buying the Ace Hi hardware store, which they owned and operated from 1947 to 1973. Patty met her future husband and began dating him her sophomore year in high school. The two were married in 1955 and have lived on their current land since 1967.Walter is the son of Les and Ila Powell. The two had 10 children during their long lives together. Ila was 95 when she passed away, leaving an incredible legacy behind. Her parents homesteaded in the mouth of Willow Creek. They were well-known as the   Bowman cowboys. Les’s mother had come to the area to cook for Mr. Pat Crandle and married Ila.. The 10 children, in order, were: Wallace, Louis, Walter, Rowena, Cork, Leslie Ann, Dianne, Jane, Willa Kay and Nona. The 10 children had 28 children between them. Walter and Patty have eight grandchildren and 11 great-grandchildren. It is very clear that “family” was and is very important to the Powells, and their bonds are deep and as strong as any in Rangely history.Walter did roustabout work for some years before becoming a welder and working in the field for 41 years. He is well known for his unmatched work ethic and ability to  work endless hours as a welder and maintain the family ranch, sometimes haying his fields through the night to get the work done. Welding was a family tradition, as his father had worked for Bill and Joe McMullen in Les’s early days in Rangely. Walter has many stories about growing up in Rangely and finding time to not only work hard but also play hard. “We could be worn down from the day’s work but when the sun went down our eyes would be wide open,” looking for common fun in a small town. Playing practical jokes on co-workers and spending time with classmates made lifelong friends for Walter. Friends speak of his intelligence and work ethic with amazing respect.After marrying and starting a family, the Powells perpetuated Patty’s love and knowledge of the horse industry, beginning with chariot racing. They have many pictures of Walter racing their horses and they had some of the best horses around. When Walter was working, the horses still needed to be exercised and trained and Patty, with the help of her children, often exercised the horses. This meant loping the horses in the chariot at least three days a week to ensure they were ready for the race. After chariot racing, the family became involved in horse racing. They had many winning Appaloosa horses. Some of their horses went as far as the world finals. This was accomplished by winning the regional high-point show. They raced in Wyoming, Idaho, Utah and Colorado, making quite a name for themselves in the Appaloosa Horse Association. One of their horses is still the co-world record holder for the 250 yard race and another Powell horse was  pictured in a magazine for Appaloosa Horselovers. The two had their first stud horse in 1961. Gene Tomlinson rode for the Powells and their success grew from there. They handed down their love for horses to Judy, their daughter, who continued raising horses and had a world champion Palomino reining horse, as well as a world champion buckskin reining horse. She competed in the world show with paint horses and traveled around the United States showing and having her horses shown. Although Patty and Walter only own one horse each now, Patty can tell stories about each horse pictured in her albums. The sign of a true horseman is when they look at pictures and  are slower to recall the riders in the pictures than the horses they’re riding.She believed in the importance of teaching kids through 4-H and helped create the “peewee” divisions at the county fair.  Patty and her long-time friend Irma Steele played a significant part in making the horse part of the fair a huge success for  many years.Walter recently received his 50-year pin for his time with the Masons and both he and Patty were Eastern Star members; Saddle Club members, where Walter served as president members of the Rracing association; and Patty served on the fair board and was the horse superintendent  for more than 15 years. They believed in the importance of having judges who would explain rules to the contestants and teach them the correct way to do things. It is because of their work that so many fundamentals were the focus of horse 4-H.Walter and Patty have been involved in the community of Rangely as well as the county for several years. Their dedication to their family, as well as their passion for horses, has made them a well-known name in the area and rightfully so. They have stood as examples of hard work and loyalty and for that they are to be commended.

Listen to this post RANGELY I The season is still young, but so far, so good for Rangely High School’s volleyball team. In fact, real good.

Listen to this post RANGELY | The Rangely OHV Adventure Rally (ROAR) starts today, Aug. 10. The weekend is full of fun for locals and visitors alike. Riding starts Thursday with an evening ride to […]