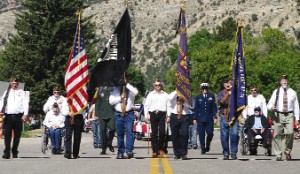 MEEKER I Today’s residents share those same traits, living in a community which continues to survive, thrive and succeed in spite of booms and busts, droughts and floods, times of plenty and times of want.
In 1855, those early settlers came together to celebrate the birth of our nation and perhaps to celebrate another year of beating the odds. Many small towns in the late 19th century held community-wide Fourth of July activities with horse races, picnics, parades and speeches. To these traditional events, the town of Meeker added a community rodeo.
Dubbed “Range Call” in the late 1930’s, Meeker’s Fourth of July celebration evolved into a three- or four-day summer festival with world-class entertainment, one of the best fireworks displays in the state, historical reenactments performed by local residents, and, yes, rodeo. Meeker’s Range Call carries the honor of being the longest-running annual rodeo in the state of Colorado.
This year’s festivities begin Friday, July 1 and continue through Monday, July 4. Highlights include the Meeker Pageant — “Twilight of the Ute Empire”; Danny Gokey in concert Saturday, July 2, with opening act Gwen Sebastian; a community Independence Day parade and a host of downtown amusements on the Fourth of July, topped off by one of the best and biggest fireworks displays on this side of the state.
The CPRA rodeo, Ugly Truck Show and Contest, live entertainment and the carnival downtown add to the weekend of fun and frolic. The ever-popular Ranch Rodeo — where local ranches have a chance to compete with each other for prize money and coveted belt buckles — will be held Monday afternoon.
While a wide range of the weekend’s events are free — the parade, the fireworks and most of the downtown events — you don’t want to miss out on the rest of the fun during Range Call. Tickets are $35 for adults, $30 for kids under 12 and seniors over 55. Kids five and under are free. Ticket prices do not include the pancake breakfast, 5K walk/run race or root beer floats. Single event tickets are available at the gate, but the purchase of a Range Call wristband is by far the best bang for your buck.
Tickets are available for purchase at the Meeker and Rangely chambers of commerce, at Wendll’s Wondrous Things in Meeker and at Murdoch’s in Craig and Clifton.

Trevor Allen McCoy, 29, and independent welder/fabricator and owner of TM Welding, LLC, went to be home with his Lord on Monday, May 30, 2016. Funeral services will be held at 10 a.m. on Saturday, […]