RANGELY I For the past six years, the Rangely Hurricanes swim team has competed in the annual Colorado Seasonal Club State Championships, and they have returned with the team championship trophy in the small club division each year. This year was no different — in addition to the team title, the Hurricanes had a high point winner too.
The Hurricanes sent six swimmers to the championships in Canon City, where 21 teams were featured in three divisions. Andrew Morton won the high point trophy in the 15-18 division, making him, according to his coach, “the top 15-18 seasonal club swimmer in the state.”
“Our top swimmer can compete with any team in the state,” Hurricanes coach Matt Scoggins said about Morton, who will be a senior at Rangely High School. “Andrew was amazing with great times and very competitive races.”
Scoggins said Morton has won the high point trophy at the state meet when he was younger, but this year was a “surprise.” 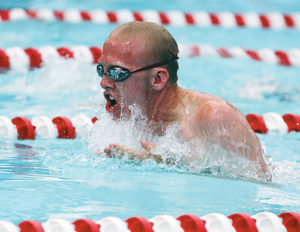 Morton swam in nine races and won five (the 100-meter freestyle, butterfly and backstroke, the 200-meter backstroke and the 200-meter individual medley). Morton finished second in the 50-meter freestyle, third in the 100-meter breaststroke, fourth in the 200-meter breaststroke and fifth in the 200-meter freestyle.
After winning four high-point trophies in the past six Seasonal Club State Championship meets, Patrick Scoggins finished second this year in the 13-and-under division, swimming in nine events, winning five and placing second in the other four.
Patrick’s older brother, William, swam in his last Seasonal Club Championship meet. William, a 2013 graduate of Rangely High School, started swimming with the Hurricanes at the age of 7.
The Scoggins brothers are the only two Hurricanes to have swam on all six state championship teams. Mary and Timothy Scoggins also swam in the state meet this year in the 9-and under division, each in two events.
Korrynn Wenzel was the other Hurricane to swim in Canon City, competing in six events in the 12-and under division.
“Korrynn struggled a little over the weekend, but she had some great swims and earned a medal (sixth) in the 100-meter freestyle,” Scoggins said.
“Andrew and William really picked up their game, and Korrynn scored some needed points as well,” he said of the season-ending meet.

Listen to this post The Rangely Hurricanes took 18 swimmers to the Western Slope League meet in Grand Junction, and, according to their coach, “The kids all improved and did a great job.”

Local swimmers can train with Olympian

Listen to this post RANGELY — It’s not every day Rangely area athletes will have a chance to enhance their competitive swimming skills with five-time Olympic medalist Josh Davis, one of the country’s greatest swimmers. […]