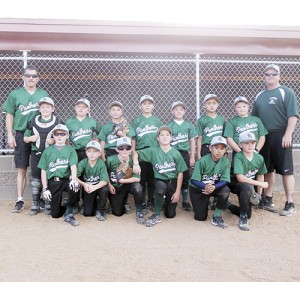 The 2012 Rangely 8, 9 and 10 year olds baseball team entered the league tournament undefeated at 7-0 and the No. 1 seed but lost in the first round to Hayden. “We stopped swinging the bat,” head coach Jerry LeBleu said of the first loss. Rangely was eliminated from the tournament when they lost 1-4 to Carelli’s of Craig. “We had fun and a good season,” LeBleu said. “We’ll learn for next year.” Representing Rangely’s 8-10 baseball team in back are coach Jerry LeBleu, Byron Mackey, Austin Davis, Grant Lancaster, Mark Mercado, Clarence Hamilton, Travis Coats, R.J. Richens and coach Jack Richens. (Front row) Justin Rusher, Zane Varner, Dylan LeBleu, Zane Cordrey, Jorge Carrasco and Philip Noyes.

Listen to this post RBC I Seven 8-10-year-old baseball teams, including three from Rio Blanco County, played in a tournament last weekend, sponsored by the ERBM Recreation and Parks District.

Listen to this post MEEKER — The Cowboys needed to win one game going in to last Friday’s doubleheader with Paonia to advance to this week’s district tournament.

Listen to this post Meeker senior Victor Villalpando winds up for a pitch during a game in Denver earlier in the season.