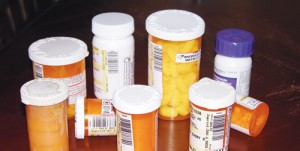 MEEKER I Meeker Police Department, in conjunction with several state health and law enforcement agencies, will join many cities and towns across the nation with its National Prescription Drug Take-Back Day on April 27.
As part of the drug take-back event, the MPD will also hold a bicycle auction in which 14 refurbished bikes will go up for sale through a silent auction.
Both events will take place at the Meeker Town Hall parking lot, with the drug take-back running from 10 a.m. to 2 p.m. and the bicycle auction running from 10 a.m. to noon.
It may be time to clean out the medicine cabinets at home as the event offers residents a way to dispose of “expired, unwanted or unused pharmaceutical controlled substances and other medications to law enforcement officers for destruction,” an MPD press release states.
“Yearly deaths in Colorado due to drug-related poisonings more than doubled from 351 in 2000 to 838 in 2011,” the release states. “Deaths involving the use of opiodal analgesic (opiate-based medications) such as morphine, codeine, oxycodone, hydrocodone, methadone and fentanyl nearly quadrupled from 87 in 2000 to 304 in 2011.”
The release also stated that Colorado has the second-worst rate of pain pill abuse in the United States, according to the 2011 National Survey of Drug Use and Health.
The program is anonymous and all efforts will be made to protect the anonymity of individuals disposing of medications; no questions or requests for identification can be made by law enforcement officers.
Participants may dispose of medication in its original container or by transferring the medication from its container and disposing of it directly into the disposal box. If an original container is submitted, the individual should remove any identifying information from the prescription label.
All solid dosage products and liquids in their consumer containers, with the exception of chemotherapy drugs, will be accepted.
As a warning from the MPD, illicit substances such as marijuana or methamphetamine are not a part of this initiative and should not be placed in collection containers. If an individual attempts to surrender an illicit controlled substance, law enforcement personnel are expected to handle such material as abandoned property in accordance with department policy.
In addition, intravenous solutions, injectable substances and syringes will not be accepted due to a potential hazard posed by blood-borne pathogens.
All participants are expected to retain possession of their own medications during the surrender process, and law enforcement personnel should not handle the medications at any time.
At the end of the event, the boxes will be sealed and labeled for turnover to the U.S. Drug Enforcement Agency.
The bicycle auction will run only from 10 a.m. to noon, and will involve “at last 14 bikes, because that is how many we have today,” Kathy Johnson of the MPD said Friday.
“We are required by law to keep these bicycles for one year,” she said. “The bikes have been rejuvenated — meaning they have been painted or had a pedal replaced or the handlebars straightened; they are used, but we have these bikes looking pretty much like new,” she said.
A piece of paper will be placed with each bicycle, and interested buyers can write their bids down on each bicycle, raising their bids throughout the two hours until the auction ends, Johnson said.
“The high bidders will pay for the bikes and can take them home,” she said. “With the sale over at noon, the bids should be awarded by about 12:15 or 12:30 p.m.”
For information, contact Johnson, who is organizing the entire event.

Incidence calls down at dispatch

Listen to this post MEEKER | “Earlier this year, Denver Bronco Von Miller was moved to action by the deaths of three Colorado’s sheriff’s deputies and the number of mass shootings across the country. Miller rallied […]

Police officer put on paid leave after shooting at motel

Listen to this post MEEKER — A Meeker police officer shot and killed a local man during an incident at a local motel March 28.