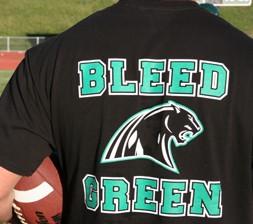 RANGELY I There wasn’t a lot to say after a 51-0 loss. There wasn’t a lot to say after the opening kickoff.
“It was 28-0 after the first quarter, and it was pretty much done,” said Rangely coach Tim Galloway.
The Panthers traveled to Basalt for their first road game of the season last Friday. It was a long trip, and not just because of the miles.
“That’s the difference between 2A and 1A,” Galloway said of Class 2A Basalt. “You’re just overmatched. What can you do? I mean, you just try to put ‘em out there and see where they can play and what they can do. You try to adjust, but there’s really not a whole lot you can do. There’s no sense yelling and screaming and getting mad. What happened, happened. You can’t change it.
“It’s just like Nebraska playing the College of the Little Sisters of the Poor. It would be no different if Basalt went and played Cherry Creek. They’ve got more talent. It’s just one of those deals.”
Not that the Panthers didn’t try everything they could to get something going against Basalt, or to stop the Longhorns. Nothing worked.
“We couldn’t run the ball. We couldn’t throw the ball. We couldn’t stop them,” Galloway said. “Nothing we tried would work.”
And it doesn’t get easier.
The Panthers, 0-2, return home Friday, but the opponent will be another 2A school — Coal Ridge. The Titans have won both of their first two games of the season.
“We have another big one this week,” Galloway said. “We’ll see if we can find a chemistry that works. We told our kids we can do it. We proved that (in a preseason scrimmage) against Fruita (a 2A school). I thought we were ready to play (last Friday). But we went out and they smacked us in the mouth and we didn’t respond. We just kind of took it.”
• • • • •
A benefit golf tournament for the Rangely football and basketball teams will be Saturday at Cedar Ridges Golf Course. The scramble start will be 9 a.m. Golfers can call Nick Lancaster at (970) 778-1127, and they can also sign up at the golf course the day of the event.

Up and down el Rio Blanco

Listen to this post Here we go again — I hope to have even more fun this time and I’m thankful to Mitch Bettis for another chance to be the editor, or as my predecessor […]

Listen to this post RANGELY I Roughly 179 students received their degrees and certificates from Colorado Northwestern Community College on Saturday afternoon, culminating what for most students has been at least two years of hard […]

Listen to this post As the Hidden Gems wilderness campaign gathers speed, maybe it’s time to slow down and ask some questions that have yet to be posed.