Emmanuel Baptist Church: If you build a parsonage, a pastor will come to serve 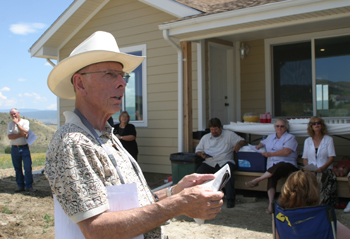 MEEKER I Faith, the Bible says, is the evidence of things not seen.
Meeker’s Emmanuel Baptist Church, on faith, built a 3,000-square-foot parsonage before it even had a pastor.
The church broke ground on a new parsonage in June 2008. A little over a year later, church members dedicated the new parsonage — in Sanderson Hills — Aug. 2. New pastor Roger Barnes and his family arrived in Meeker in mid July.
Gerry LaBonte, the church’s treasurer, referred to the parsonage project as “working on God’s miracle house.”
Church members David and Linda Hokit supervised the project.
“They made this their full-time ministry,” said John Robbins, who has been interim pastor of the church since 2007. “Other church members have given invaluable assistance in moving the project toward completion.”


At the parsonage dedication, Robbins read aloud an article he wrote about the congregation’s building project. He cited numerous examples of “when we have thought that there is no way that we can raise the money, but God always provided.”
• A church in Colorado Springs provided money to buy a lot in the Sanderson Hills subdivision.
• A couple from Emmanuel Baptist Church loaned the church $40,000 to begin building the parsonage and said they would finance the rest of the project once they sold their house in another town.
• Volunteers from Craig Grand Junction, Rifle, Steamboat Springs offered their services on the project.
• Another Meeker church, of a different denomination, bought the roofing shingles.
• A church from Nebraska sent a team of workers for a week.
• A check of a “substantial” amount was received from a man who had visited the church and “met the needs of the moment.”
• A prison cabinet shop built the kitchen cabinets for the cost of materials.
• A master electrician from Rifle volunteered to install the wiring.
• One of the church’s members provided a forklift. Another family provided a heavy-duty trailer for hauling supplies.
• A group of prison inmates from Rifle Correctional Facility installed the finished drywall.
“This is God’s way of honoring your faith,” Robbins said told church members who gathered for the parsonage dedication. “God provided the money, a few dollars at a time. Sometimes a thousand dollars at a time.”

If it’s true every dog has its day, then Buddy certainly had his. And he has Glenn Abbott to thank for it. […]

Listen to this post Buddy Kenneth Linderman of Grand Junction died Sept. 12, 2010, at Kindred Hospital in Denver after a short illness. A service was held Monday, Sept. 20, 2010, at Callahan-Edfast Mortuary in […]