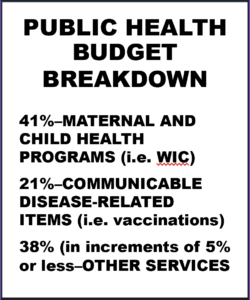 A breakdown of the public health budget indicates 41% of the budget is spent on maternal and child health programs like the WIC (Women-Infant-Children) supplemental nutrition program. Another 21% is spent on communicable disease-related items, such as vaccinations. The remainder of the budget is divided into percentages of 5 or less.

Harvey said the number of WIC clients in Rangely have doubled.

“We’re working with Barb and DHS (Department of Human Services) to get a handle on what’s going on in Rangely. We’re planning to collaborate a lot more in the future,” Harvey said.

Beginning Aug. 5, Rangely will have a full-time public health nurse based in Rangely.

“The feedback from the community has been overwhelming,” Harvey said.

In the regular meeting, commissioners:

– Approved a request for $88,200 in Federal assistance for the Rangely Airport pavement maintenance and remarking project. An additional $4,900 is expected to come from the state, and $4,900 from the county.

– Approved the construction and installation of a secondary tower site on county property off County Road 8 in order to expand broadband access to residents who can’t see the Marvine tower site.

– Approved a letter supporting the Colorado Cattlemen’s Agricultural Land Trust’s application for funding to purchase conservation easements on the Krueger Villa Ranch, Strawberry Ranch and the Slash EV Ranch. Commissioner Moyer requested that in the future the county surveyor would provide maps of the proposed easements.

– Approved filling an empty position at the landfill. Commissioner Moyer said the position in question, as well as others recently listed, are “filling existing positions,” not the creation of new positions at the county. The detention officer position approved earlier in June was the only new position created this year, according to Finance Director Janae Stansworth.

– Awarded a bid to Scott Contracting for the construction of a stock pass on County Road 5, in an amount not to exceed $747,081.50. The bids received were higher than the estimated costs for the project, but still within budget. Scott Contracting is also the contractor for the Hwy. 13 improvement project currently underway.

Mona Avey, who has announced her candidacy for commissioner in 2020, thanked the board “for creating and passing that resolution last week regarding the building codes, I think it was time for a show of good faith and people appreciate it.”

“It’s a work in progress,” said board chair Jeff Rector.

RBC | Last week’s stormy weather proved detrimental to the county’s broadband program, as a direct hit to the side of the Pollard tower bypassed the lightning and grounding rod and melted most of the […]

Ballots for the 2012 republican primary election will be conducted by mail-ballot, which will be delivered to local mailboxes between June 4-8 and are due back Monday, June 25.