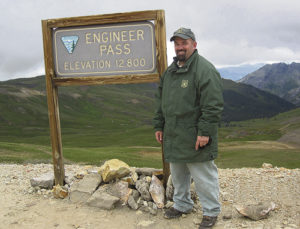 MEEKER I Curtis Keetch grew up in a small ranching community in the southeast corner of Idaho on a family-owned cattle ranch. He learned to love and respect the outdoors at an early age.

Curtis spent as much time as he could in the outdoors and he wanted a career that kept his feet in the dirt. While still in high school, he started working for the U.S.Forest Service.
Curtis attended the University of Idaho and received a bachelor’s degree in wildlife resources. While attending the university, he spent summers helping on the ranch and working as a seasonal worker for the USFS on timber, fire, range and recreation crews.
Keetch got his first full-time job with the Forest Service as an engine captain and fuels technician. He says success came in 2003, when he landed a wildlife biologist job on the Caribou-Targhee National Forest in southeast Idaho. While working on the Caribou-Targhee National Forest, Curtis met his wife Nikki. They have three beautiful daughters.
The Keetch family moved from Idaho to Norwood, Colo., in 2009. Curtis continued his career with the Forest Service in Norwood for seven years as a zone wildlife biologist.
Curtis had this to say about his new assignment on the Blanco Ranger District: “I truly believe that my background in ranching, fire and wildlife will benefit me as a district ranger. My family and I are excited to become a part of the Meeker community.”
An avid outdoorsman, Keetch loves to go fishing, hunting, camping and hiking.
Anything he can do to be outdoors, he said, “suits me fine.”

RBC I Recent avalanche fatalities and current snowpack conditions in the high country have prompted the U.S. Forest Service to send a strong warning to those traveling in the backcountry to use extreme caution. Facebook […]

BLM and Forest Service affirm non-listing of grouse in state

RBC I On May 28, the Bureau of Land Management (BLM) and the U.S. Forest Service (USFS) released final environmental reviews for land use plans in Colorado that will help to conserve greater sage-grouse habitat […]