RANGELY | No charges will be filed against Rangely Police Lt. Roy Kinney or any of the officers involved in the shooting death of Daniel Pierce, 58, last December. Ninth Judicial District Attorney Jeff Cheney outlined his reasons for the decision in a 12-page letter released earlier this month following the completion of an investigation conducted by the 9th Judicial Critical Incident Team (CIT).

Pierce, who moved to Rangely late last summer, had several altercations with the Rangely Police Department in the week prior to his death, according to the letter. 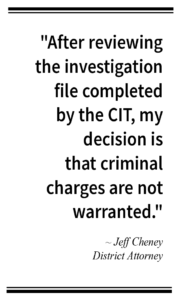 – Dec. 4, 2018: Lt. Kinney and Rangely Police Chief Vince Wilczek responded to reports from Rangely High School students about a man attempting to coax them into a van. Wilczek and Kinney identified Pierce as the owner of the van and spoke to him. Pierce’s answers prompted Kinney to contact Pierce’s mother in California, who told him her son had been diagnosed as paranoid schizophrenic several years earlier.

– Dec. 8, 2018: The Rangely PD encountered Pierce again when bank personnel reported an incident in which Pierce told a teller “he was coming back Monday and Jesus was coming with him.” Kinney contacted Pierce at home. During that interview, Pierce reportedly said he was Jesus Christ in the flesh and asked Kinney to examine scars on his feet and wrists. Kinney asked Pierce “whether Jesus Christ felt like hurting anyone or himself today,” to which Pierce responded in the negative. Following that interview, Kinney contacted mental health personnel and was told Pierce was not subject to a mental health hold or commitment because he said he was not harmful to himself or others.

– Dec. 10, 2018: Pierce approached Lt. Kinney outside the Kum & Go store and told him, “the person who is causing all this trouble is in the school and has his girlfriend tied up in the basement.” Later that night, a car was reported stolen from the Kum & Go store. Surveillance video indicated Pierce took the vehicle and left the parking lot. The owner of the vehicle told Kinney there was a rifle “that he did not think was loaded” in the front seat and ammunition in the vehicle, as well as a large knife.

– Suspect eludes officers: RBC Deputy Max Becker notified dispatch the stolen vehicle was southbound on Hwy. 139 and he was following the vehicle in a marked patrol vehicle, but would not initiate a traffic stop without back-up. Kinney responded to the request for back-up in his patrol vehicle. Chief Wilczek and Officer Tyrinn Hamblin (now interim chief) also responded, all in patrol vehicles with visible decals, lights and sirens.

Kinney caught up to the vehicle and passed it, at which time Pierce turned around and started heading northbound toward Rangely, ignoring demands via loudspeaker to pull over. Spike strips deployed by Wilczek deflated one front tire, but Pierce continued driving erratically, narrowly avoiding a collision with an oncoming vehicle. When Kinney attempted to pass Pierce, Pierce swerved toward the patrol vehicle. Kinney deployed a second spike strip, deflating the other front tire.

When Pierce attempted to turn left toward Rangely at the intersection of highways 139 and 64, Officer Hamblin was instructed to “bump” Pierce’s vehicle, causing the vehicle to spin 360 degrees and stop facing northbound again.

With police vehicles on both sides and with Kinney’s patrol vehicle in front of him, Pierce rammed Kinney’s vehicle, causing extensive damage. Wilczek and Hamblin exited their vehicles, calling for Pierce to show his hands, which he did not do. As it appeared Pierce was about to ram Kinney’s vehicle again, Wilczek said he was going to shoot out the rear tire in an attempt to further disable the vehicle. Still in his patrol vehicle, Kinney did not hear Wilczek’s announcement, and when he heard the gunshot, he believed Pierce was shooting at Wilczek and Hamblin. Kinney fired twice through the windshield of the stolen vehicle, striking Pierce in the head. Within seconds, Wilczek fired an additional shot at the rear tires. All four shots were accounted for.

It was determined that Pierce was still breathing, and Kinney began efforts to get Pierce out of the stolen vehicle for the medical attention. Pierce was transported by ambulance to Rangely District Hospital where he later died.

Cheney’s letter states, “After reviewing the investigation file completed by the CIT, my decision is that criminal charges are not warranted. Although I did consider potential violations of police policies and best practices as a factor in my decision, my decision is based on a critical legal analysis of the timeframe during which (a) Chief Wilczek fired at the rear driver’s side tire in order to further disable the stolen vehicle and (b) deadly force was utilized by Lt. Kinney which killed Mr. Pierce.”

Asked what will happen next with Kinney’s and Wilczek’s roles with the Rangely Police Department, and when that decision will be made, Rangely Town Manager Lisa Piering said she was unable to comment on personnel matters.

RANGELY | In a public hearing during the Oct. 25 town council meeting in Rangely, Chief of Police Vincent Wilczek highlighted efforts by the Rangely Police Department to eliminate drug traffic coming into Rangely from […]

MEEKER | Most everyone who suffers from some sort of mental disorder, does so in private. That’s why it’s so hard for people to take these illnesses seriously. That, and the lack of research and education […]

Rangely first responders take the Polar Plunge to raise funds for the Special Olympics When you think of bravery, do you think of jumping into ~45-degree water on a 35-degree morning for a good cause? […]