RBC | We’re going to be getting a lot of ballots in the mail this year, beginning in February with Colorado’s presidential primary election on March 3. Where primary elections used to be limited to registered members of a political party, changes to Colorado’s law have opened primary voting to unaffiliated voters. If you are an unaffiliated registered voter, you can choose to vote in either the Democratic or the Republican primary, but you may not vote in both.

Locally, election season gets underway with the caucuses on March 7 for Republicans and Democrats. At the caucus, registered party members will elect party officers and select delegates and alternates to represent the party at the county assembly. Also at the caucus, candidates for local offices will give speeches and present their campaign platforms.

While no Democratic candidates have announced their intention to run for local elected office, there are four Republicans — Ty Gates, Mona Avey, Scott Nielsen and Kai Turner — vying for the District 3 county commissioner seat currently held by Si Woodruff, who is not running again. Current board chair Jeff Rector will run unopposed for reelection in Precinct 2.

The Town of Meeker will also hold an election this spring, with three seats open for trustees and both mayoral positions open. Trustees Travis Day, Melissa Kindall and Wendy Gutierrez are all running again. Mayor Regas Halandras is term-limited after serving on the board for eight years and as mayor for six. Candidates have until the end of January to submit completed petitions to be added to the April 7 ballot.

The Town of Rangely will seek to fill three trustee positions for four-year terms and the mayor’s seat, a two-year term, in April. Trustees Andy Key, Trey Robie and Tyson Hacking are up for reelection. Hacking and Robie have picked up petition packets to run again. Mayor Andy Shaffer is also up for reelection and intends to run again. Trustee Matt Billgren’s seat is open for appointment, as Billgren has resigned effective Jan. 1. Petitions must be returned to the Town Clerk by Jan. 27. 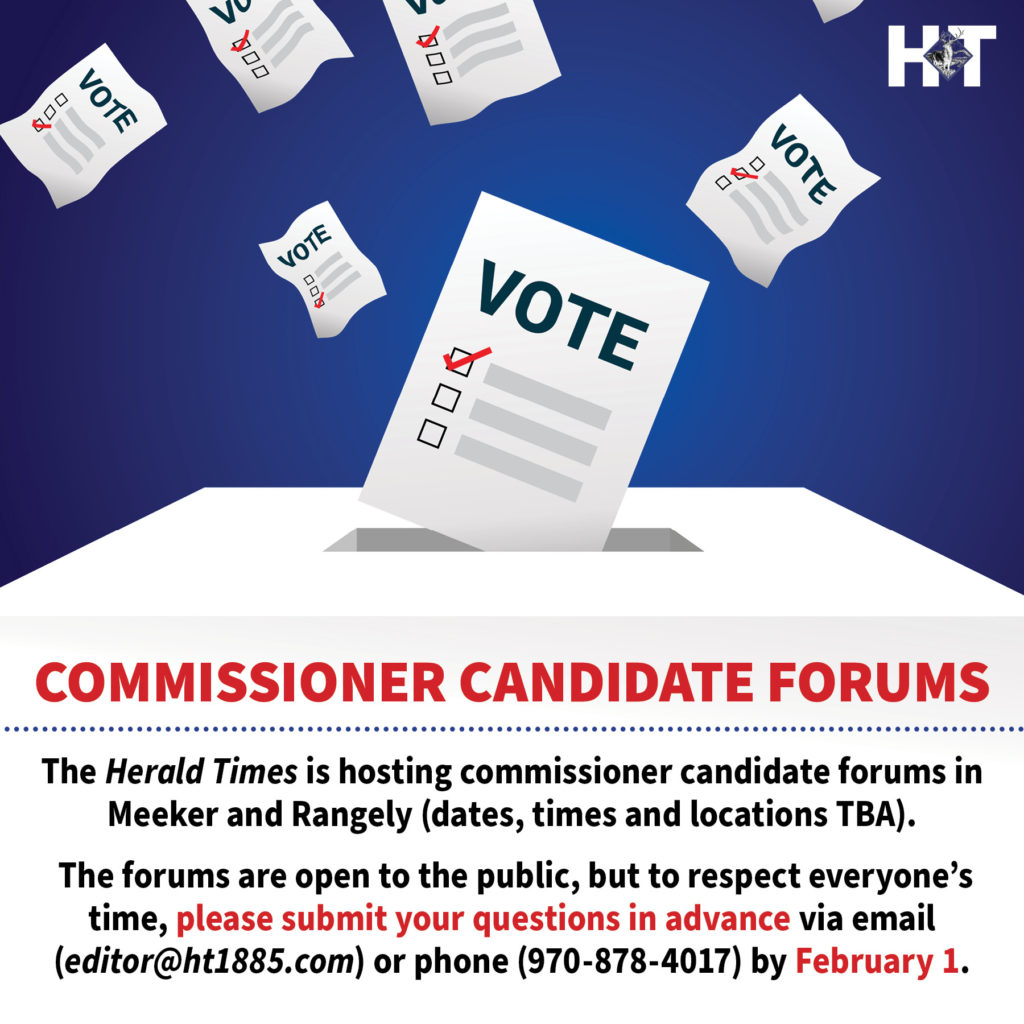 Editor’s Note: The print version of this story incorrectly stated that only the Democratic primary ballot will have candidates. There are actually six Republican primary candidates on the ballot, according to RBC Clerk and Recorder Boots Campbell. We regret the error.

Letter to the Editor: State budget deficit is unacceptable

Letter to the Editor: Looking at incentives not a new concept

Dear Editor: Peggy Rector’s letter in last week’s Herald Times was timely in the sense that Tax Incentives for Qualifying Businesses is exactly what the town trustees and mayor look to consider for further support. […]

Rangely gets $595K in grants

RANGELY — In these tough economic times, the town of Rangely received some good news. The Colorado Department of Local Affairs awarded energy impact funding grants to the town for requests it submitted in December. […]