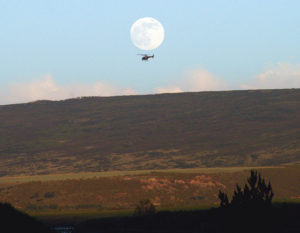 Helicopter pilot J.T. Theis of Vale, Ore., flies toward Meeker Airport, sliding between the moon and the horizon as he flies a helicopter owned by Hillcrest Aircraft Co. of Lewiston, Idaho on Saturday. He had been working with a BLM crew on the Collins Fire in the Piceance Basim, 17 miles southwest of Meeker. According to fire management officials in their last reports issued Tuesday before returning to their home bases, the Collins Fire had burned 380 acres of pinion pine/juniper and was 90 percent contained. The Wild Rose Fire, 20 miles south of Rangely, had burned 1,067 acres of mostly juniper and was deemed to be 95 percent contained. Reportedly, both fires were caused by lightning and no structures were lost.

Listen to this post MEEKER I The Bureau of Land Management is now seeking public comment on a proposal to temporarily close access to public lands 15 miles north of Meeker for safety reasons.

Listen to this post RBC I On Nov. 27, the Bureau of Land Management released for public review two environmental assessments evaluating potential parcels to offer in its June 12, 2014 oil and gas lease […]