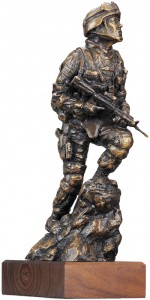 RBC I Independence Day is celebrated because of the brave soldiers serving in the armed forces, fighting and defending the Constitution of the United States and the rights it provides all Americans.

Range Call has celebrated Independence Day in Meeker since 1885 and Rio Blanco County has produced hundreds of soldiers over the years. The theme for the 127th annual Range Call Celebration is, fittingly, “Gone but not Forgotten.”

The Meeker VFW Post 5843 and Rangely VFW Post 5261 have proposed to install a bronze sculpture titled “Sacrifice and Resolution” by local artist and veteran John Kobald on the sidewalk leading to the south entrance of the Rio Blanco County Courthouse.

“This memorial honors the men and women of Rio Blanco County who served in the armed forces of the United States during peace and war,” reads a brochure describing the statue, which will be a bronze sculpture of a 1.25 life-size modern day infantry soldier. “This memorial honors those of all ranks and service.”
“The location of the sculpture ‘Sacrifice and Resolution’ in front of the courthouse is a reminder of our freedoms and of those who have served to protect them,” reads the artist’s statement. “The soldier is facing west, vigilantly climbing upward, with the evening sun highlighting his features. The base will be constructed of the same stone that is on the courthouse and will have plaques for all military branches.”
Contributions toward completion of the memorial, approved by the Rio Blanco County Board of Commissioners, are being accepted into the Rio Blanco County Memorial Fund set up at Mountain Valley Bank or can be made after the parade. The VFW and Ladies Auxiliary will have a tent set up at the proposed site (pictured below) today after the parade and will also have a booth at the concert Saturday, July 7. Donors of $2,500 to the VFW Post 5843 (a 501(c)3 non-profit organization) will receive a 14-inch (pictured left) bronze replica of the sculpture. Contributions of $7,500 or more will receive a 30-inch bronze of the sculpture.

Listen to this post RANGELY | The word “volunteer” is never so cherished as when it’s applied to those who signed a blank check on their lives in service to our country. Rio Blanco County […]

‘The Chosin Few’ of the Korean War

Listen to this post By Wes Eubanks Meeker VFW RBC | By mid-1950 after the successful landing at Inchon by the U.S. X Corps and the subsequent destruction of the Korean People’s Army, the Korean […]