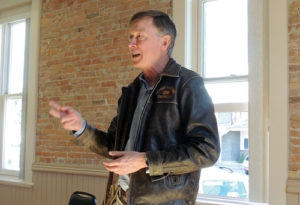 The bank’s meeting room had a standing-room-only crowd of Republicans and Democrats from both sides of the county. Hickenlooper answered audience questions about the energy industry in Northwestern Colorado. He also addressed Colorado’s economic and business growth—the state has the No. 1 growing economy in the nation, and talked about how Colorado was the first state ever to face 13 major disasters from floods to fires in just one year. According to Hickenlooper, Colorado is being watched for its ability to bring energy, environment and government groups together to work out an energy policy that will satisify everyone. He also pointed out that Colorado’s abortion rate has dropped 40 percent and teen pregnancy is down 35 percent.

Letter to the Editor: Vital for broadband issue to pass in RBC

Dear Editor: Broadband ballot issue 1A is a critically important measure before Rio Blanco County voters for a variety of beneficial reasons, including economic development, heritage and agri-tourism, public education, high-quality entertainment and much more.

Flags across Colorado have been flown at half staff during the past week — as ordered by Gov. John Hickenlooper — to mourn the death of Tom Clements, his appointed executive director of the Colorado […]

DENVER I Gov. John Hickenlooper has announced that Shailen Bhatt will be the next executive director for the Colorado Department of Transportation. He will begin at CDOT in mid-February.