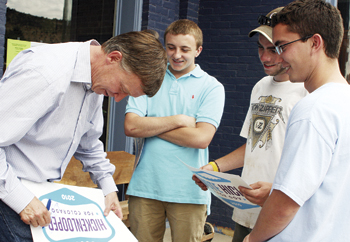 John Hickenlooper, Denver mayor and Democratic candidate for governor, made a stop in Meeker on Monday during a campaign swing through northwest Colorado. After addressing a crowd of 40 some people at the Meeker Hotel, he signed a poster for Sam Love, Spencer Madison and Cameron Glasscock. Hickenlooper was greeted by Sandra Besseghini, who introduced him to the group of Rio Blanco County Democrats, which included several residents from Rangely. “Do I like his chances?” Besseghini said. “I think they’re pretty good. I think he will have broad appeal.” Sisters Kristine, left, and Sue Hicken posed with Hickenlooper. “We’re possible cousins,” Kristine joked. “We just dropped the -looper.”

Listen to this post RBC I The Meeker Board of Education will take on a new look, the Rangely School Board will remain the same, the mil levy tax override for added Rangely school funding […]

Listen to this post RANGELY | Paula Davis defeated Dan Eddy in Tuesday’s election for mayor. Clayton Gohr received the most votes for trustee. For more information about results of the mayoral and trustee election, […]

Listen to this post MEEKER | Candidates have been announced for the Town of Meeker municipal election in April. Six individuals turned in petitions. For mayor, Regas Halandras will run unopposed for his third term. […]