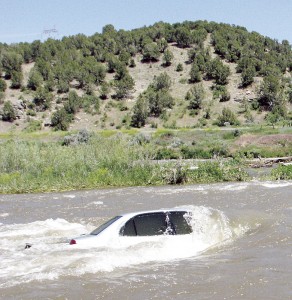 Skid marks show where Christine Murray, 23, of Meeker, swerved to miss a deer, lost control of her vehicle, and landed in the White River between Pearce’s and Rogers’ bridges on RBC Road 8. According to RBC deputy Paula Dent, at approximately 9 a.m. on June 25, good Samaritan Albert Avey encountered a wet and barefoot Murray, who had gotten out of her vehicle and climbed out of the river at Rogers’ bridge. Deputy Dent said Murray was treated and released from Pioneers Medical Center and was not issued a citation. Murray’s car has since floated under two bridges and was hung up below the Green Cabins, where this picture was taken. “She was lucky,” Dent said.

Listen to this post MEEKER I The Rio Blanco County Sheriff’s Office notified residents that a 200-pair phone line was severed late Tuesday at the junction of County Road 8 and Highway 13, affecting service […]

Sheep Alert! Watch for sheep this weekend and next

Listen to this post RBC | Angelo Theos will be trailing his sheep down County Road 8 on Nov. 16 and 17 (this Saturday and Sunday.) Sunday morning one herd will go through town and […]

Listen to this post RBC | Rio Blanco County has issued “Cone Zone Reports” for the Piceance Creek Area and North Fork Road. Details are listed below.