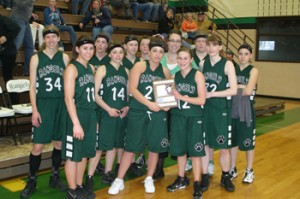 RANGELY I It’s on to regionals. And it will be a bit of a drive.
Based on their second-place finish at last weekend’s district basketball tournament, which Rangely hosted, the Lady Panthers are headed to Durango — the farthest regional site. All four teams in last weekend’s Western Slope League district tournament advanced to regionals, but their seeding and where they play was determined by how they finished at districts.
The winner in the four-team regional tournament advances to the state tournament the following weekend in Denver.
“I feel pretty good. I think we have a good shot to do pretty well,” said Rangely coach Jimmie Mergelman.
After staying home last weekend, the Lady Panthers will hit the road this week. They depart for Durango after school today.
“That made a huge difference,” Mergelman said of hosting the second round of districts. “The girls got to go home and eat and sleep in their own beds. That was nice.”
The 14-8 Lady Panthers will play Lutheran Parker, 15-7, in the first round of regionals at 7 p.m. Friday. If they win, the Lady Panthers would play at 1 p.m. Saturday for the right to go to state.
Dolores is the No. 1 seed at the Durango regional, while Rangely is the second seed. Lutheran Parker is the third seed and the fourth seed is Sanford.
At last weekend’s district tournament, the Lady Panthers won their opener against Hayden 47-39, but lost to 20-1 Paonia in the finals 48-34.
“You know, I thought our defense was really good, but we didn’t convert enough on offense, obviously,” Mergelman said of the game against league-champion Paonia. “We just get in too big of a hurry and rush it. We could always shoot better. On average, we shoot about 30 percent. If we could shoot 40 or 45 percent, we’d be in a lot better shape.”
Even with the loss to Paonia in last weekend’s district tournament, the Lady Panthers still advanced.
It won’t be like that this week at regionals.
“It’s a one-and-done tournament,” Mergelman said.

There will be a motorcycle poker run Saturday, July 11 to benefit the Toni Simmons medical fund.

Daylight Saving Time ends at 2 a.m. Sunday, Nov. 7. Remember to set your clocks back one hour. The current schedule, adopted in 2007, calls for DST to extend from the second Sunday in March […]