RANGELY I Approximately 65 students and dozens of parents turned out for Parkview Elementary School’s inaugural Lego Club meeting in the school gymnasium on Oct. 15.
Club organizers and mother-daughter team Cheri Smith and Brooke Lohse, who launched the club after physical education teacher Beth Scoggins said she had heard of Lego clubs at other schools and thought one could succeed in Rangely, said they were pleased and surprised at the turnout.
“When we started advertising, we heard a lot of chatter in the halls of the school, so we knew we were on to something,” Lohse said. “But I don’t think we quite expected that great of a turnout for the first meeting and so many parents who stayed.”
During the 75 minutes the club meets each month, students will be given a specific theme to build from, although what and how they build is up to them. Learning about an actual fire truck’s tools and functions or touring the airport and its planes are future possibilities on Smith’s radar.
“Kids do pretty well building by themselves, but some of them need ideas or suggestions about where they’re headed,” Smith said.
After 15 minutes of the theme’s introduction, kids will spend the next 50 minutes creating, with the remaining time devoted to clean up. All Lego pieces are provided, although the large turnout means that Lohse and Smith will continue seeking new and gently used Legos or cash donations to buy them.
“We can still definitely use more,” Smith said. 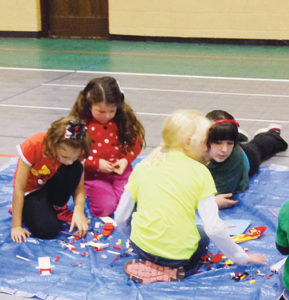 Last week, after an introduction to the club and its rules, the meeting was devoted to free play. Some students worked on Lego kits while others built their own creations from Legos, Duplos and K’Nex building blocks. Blocks bought by the school’s activity fund and donated by community members made up the bulk of the sets, which were crafted into castles and trains among other imaginings.
One rule the club will follow, garnered from conversations Smith and Lohse have had with other club organizers and support organization Lego Education, may be a tough one for kids at first.
“At the end of the night, every creation needs to be taken apart,” Smith said. “That is hard. They work hard on what they make. But if you don’t, you run out of Legos quickly. And if they come in at each meeting and the Legos are all new again, they’ll come up with brand new ideas.”
Smith said that starting in November, she and Lohse will run a photo booth to capture kids’ creations before they are dismantled. Students will then take the photos and their memories home until next time.
Lohse and Smith have three more meetings planned this year, on Nov. 5, Nov. 19, and Dec. 10 from 6 to 7:15 p.m. in the Parkview gym. As they move forward with the club, they would like ideas for future themes based on Rangely residents’ professions and abilities.
At the same time, Smith keeps other possibilities for the club’s future in mind.
“If the interest continues, we will look into Lego Legion, which is robotic Lego competitions,” Smith said. “But for now, I just want the kids to have the opportunity to socialize and build for fun.”

RANGELY — What a difference a year makes. Or six months. “We look back at September and we had over 40 new students, we were looking at a bond issue, oil was over $100 a […]

Approximately 72 fourth- and fifth-grade students participated in Parkview Elementary School’s inaugural Science Fair on May 14. Students completed experiments at home and worked on results in classrooms, with projects ranging from magnetic science to […]