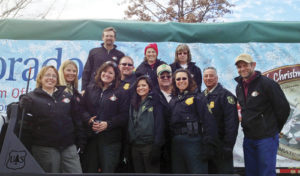 The 2012 Christmas Tree crew, which included Natasha Goedert, Patty Wyatt, Ken Coffin, Lynn Lockwood, Toni Toelle, Kristin Silva, Gerald and Twila Morris, of Meeker, were the last to sign the banner before the tree was unwrapped after arriving at Andrews Air Force Base.

Santa and Mrs. Claus take a break at the Mack headquarters in Allentown, Penn. 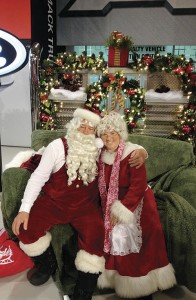 Mack donated the two tractors used to haul the Capitol Christmas tree and 70 accompanying trees, with one being driven by former Senator Ben Nighthorse Campbell who won the drag race between the two rigs on Charlotte Motor Speedway in Charlotte, N.C. The other truck was driven by Dwayne Bruasseau. 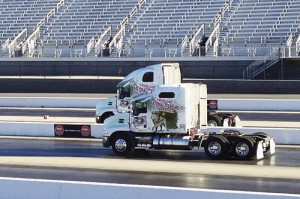 The caravan was escorted out of New Mexico by the National Guard Armory, State Patrol and City of Albuquerque and Bernalillo County officers. Streets were blocked off as the 105-foot tractor-trailer makes a corner in Dallas, Tex. 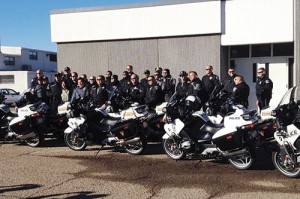 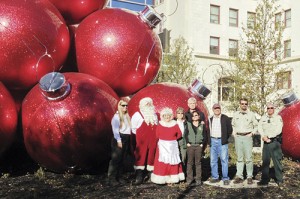 They and others made the 5,500 mile trip to deliver the 2012 Capitol Christmas Tree to be lit by Speaker of the House John Boehner Dec. 5 at 5 p.m. Sharing information about the White River National Forest, Meeker, Rangely and Rio Blanco County, as well as Christmas cheer along the way.

Santa and Mrs. Claus honored as grand marshals for Parade of Lights

Listen to this post MEEKER I During his travels throughout the past 56 years, Santa discovered the small community of Meeker and decided that this special little place would become a focal point of his […]

Listen to this post MEEKER I The harvest of the 2012 Capitol Christmas Tree drew hundreds of people to the two-day celebration in Meeker before beginning its journey to Washington, D.C. “I never would have […]

Claus for a good cause

Listen to this post MEEKER I Gerald and Twila Morris sacrificed their time and energy for the “Claus” once again last Saturday in Denver, sweltering in the heat as Santa and Mrs. Claus. They were […]