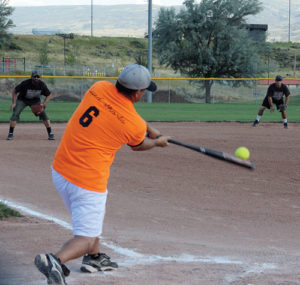 Local baseball coach Brian Merrifield, who plays coed softball on the Ripped Shorts team, is pictured making contact for an RBI against defending champions Ace Trucking in one of the final games of the regular season. The double elimination tournament started Wednesday and the bracket was not set at press time, but Ace has the most wins with seven and three losses.

Rangely’s Prater’s Plumbing has six wins and has given up two forfeits. Ripped Shorts, PMC and the Enforcers also have at least six wins to make the tournament competitive, with Westlands Rancheros and Natural Soda also in the bracket.

Listen to this post MEEKER | The ERBM Recreation and Park District is seeking teams for the 2018 adult recreational coed softball league this summer. A minimum of four teams is needed to play the […]